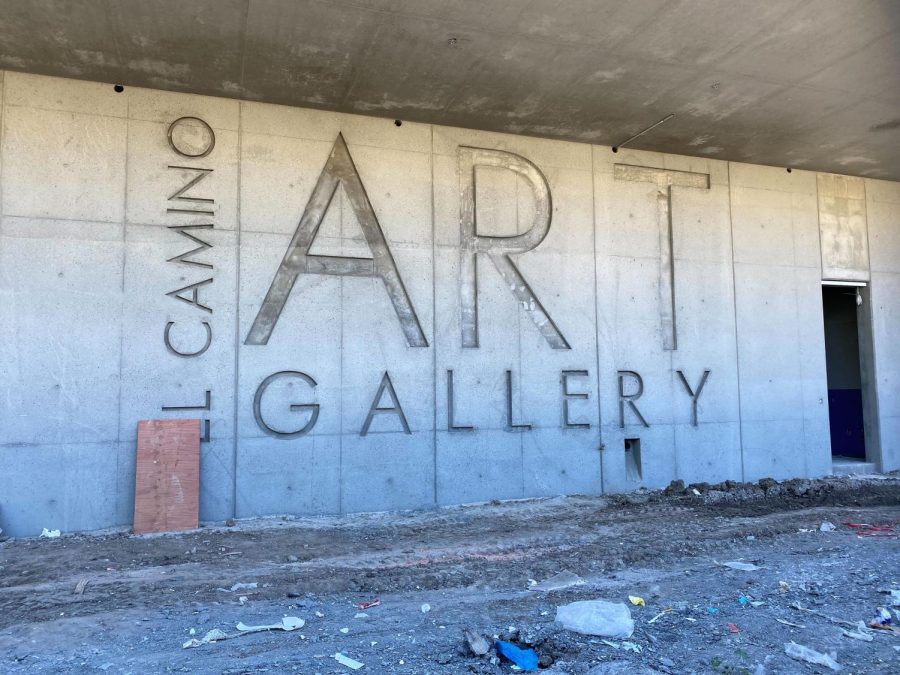 Construction progress is underway on the Arts Complex Building at El Camino College. Recently, windows, stairs, and logos have all be added to the building that is currently scheduled for completion in fall 2022. (Khoury Williams | The Union)

A Facilities Master Plan Project has been in the works at El Camino College since 2012, with construction plans likely continuing for the next ten years after 2022.

The following list includes numerous completed projects of both new and renovated buildings from the past ten years.

Currently, El Camino College has ongoing construction projects for two new buildings, the Behavioral and Social Science Building, as well as the Arts Complex Building, which were both in planned progress since 2012.

“The district passed a Measure E in 2012 and it was part of the facility’s master plan that was developed at that time. The plan had identified projects based on the facility’s needs,” said Guitierrez.

In order for the plan to move forward, it had to be approved by the Board of Trustees.

There was a budget set for both buildings which was funded by the Measure E bond. Campos said that the Behavioral & Social Science was set at an overall rounded cost of $30 million while the funding for the Arts Complex was set at $40 million.

The need to contract construction companies increased as the process moved forward.

“The contractor that was rewarded is the same contractor for both buildings,” Campos said, “The general contractor is named ACC Contractors.”

Before choosing their contractor, candidates needed to go through a bidding process before being awarded a contract.

This process involves Guitierez and Campos working with a design team to prepare drawings and specifications. They then bid the project information out to multiple general contractors and they offer their costs to perform the work.

While the contractors work, there is a project inspector that watches over them to make sure everything gets done.

Project inspector Tom Lavia, 69, who is in charge of inspecting the Behavioral and Social Science building, mentioned his role in the project.

“My function is to watch the contractors build the project and make sure they follow the drawings that tell them how to build it,” Lavia said. “We also have the specifications that give a narrative of how they’re supposed to construct [the project].”

Campos said that before the actual construction started in 2020, there were years of design and submissions to review agencies for approval. Besides waiting for that approval for years, another step that was taken in order to actually start construction was to have the old Student Services and Student Activities buildings demolished, which occurred in 2019.

“We are actually targeting to complete fall of this year,” Campos said.

This is known as “substantially complete” and will allow the move in and set up of equipment inside the new buildings.

“We are working towards a larger, physical move[in] in the winter break of this year,” Campos said.

With the construction going on, Guitierrez and Campos’ number one priority is safety.

“Safety is always number one priority. We are especially careful about what we call site logistics, safety and security around our construction site,” Campos said. “With the location of the construction being almost in the middle of the campus, it was important for us to figure out the site logistics so that it would least disrupt the main points of flow for pedestrians.”

Increased pedestrian flow has resulted in more coordination between vehicles having to get by safely with students and staff walking by.

“Even before more students started arriving on campus, there was already a dedicated monitor at that gate to make sure traffic was controlled for everyone’s safety,” Campos said.

El Camino library support staff Lisa George, who stands right inside the entrance of the library, says living through the construction was like living through a game of Tetris.

Other staff members like utility worker Richard Hawes, 62, said that the construction around campus has had no effect on him getting around campus.

Over the years, the campus has had many changes and students and staff had their own opinions about the ongoing construction here on campus.

Julie Bourlier, the director of El Camino’s bookstore, said that when construction first began, it was nice to see them go from the tearing down of the previous buildings to the new ones rising.

With all the new changes going on in campus, Bourlier said, it would be nice to see more classroom buildings closer to the bookstore, potentially encouraging more students to park in parking lot C, which could lead more students to visit El Camino’s bookstore.

“I know the fine arts building will eventually be torn down and they’ll make a new one,” Okazaki said. “Being a music major, it will be really cool to see a new Music Building someday. It probably won’t be when I’m still going here but even so, it would be nice to think about.”