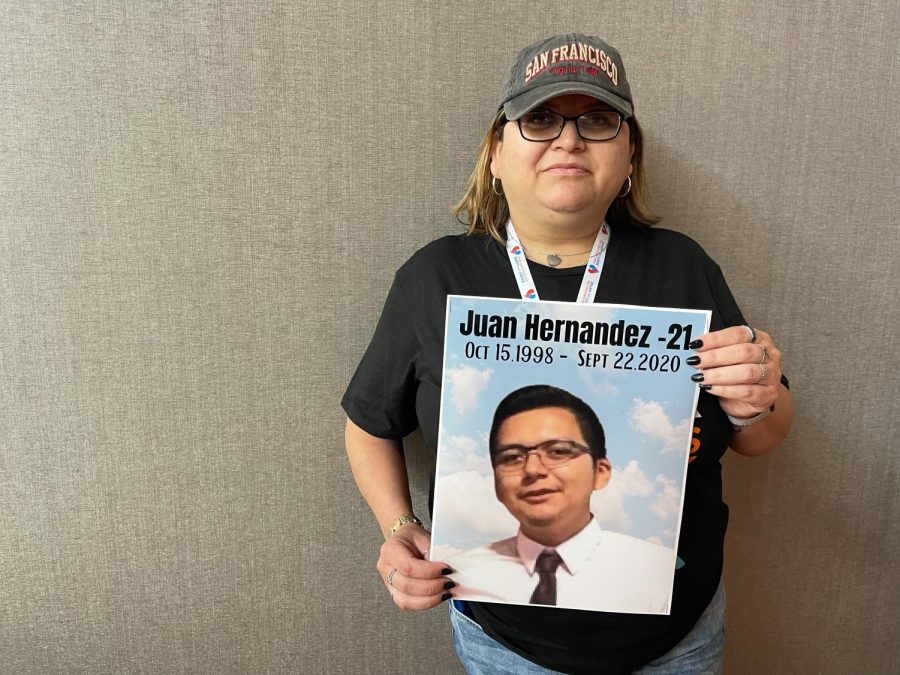 Yajaira Hernandez holds a photo of her son, El Camino College student Juan Hernandez, 21, at the #SurvivorsSpeak rally in Sacramento on Tuesday, April 26. On Tuesday, May 3, Hernandez went to Clara Shortridge Foltz Courthouse for a hearing in the case of The People of Calif. vs. Sonita Heng. Heng, 22, has accepted a plea deal for her role in the murder of Hernandez' son. (Kim McGill | The Union)

The trial of the accused in the killing of El Camino College student Juan Carlos Hernandez is expected to commence on Sept. 6.

In a pre-trial hearing in the case of the People of California vs. Ethan Kedar Astaphan on Tuesday, May 3, at Clara Shortridge Foltz Courthouse in downtown Los Angeles, Astaphan, 28, of San Gabriel, waived his rights to a speedy trial and agreed to return to court on July 6 for another pre-trial hearing.

Unless there are further postponements, the trial will start on or before September 6.

On Sept. 22, 2020, 21-year-old El Camino College engineering student Juan Carlos Hernandez left from his home on Adams Blvd. in South Central Los Angeles. He was going to his job at the V.I.P. Collective marijuana dispensary at 8113 South Western Avenue. He never returned home.

In a preliminary hearing was held over three days from Monday, Feb. 28 to Wednesday, March 2, 2022 before Judge Michael E. Pastor in Department 41.

Witnesses testified during the hearing that Astpahan, who was Hernandez’ supervisor, along with the dispensary owner, Weijia Peng, killed Hernandez and dumped his body in a remote section of the Mojave Desert.

Peng fled to Turkey where he has been detained and is fighting extradition. Peng’s then girlfriend, 22-year-old Sonita Heng, is accused of being an accomplice. She is testifying against Astaphan as part of a plea deal.

Romero described the image as showing Astaphan on top of Hernandez, with his right arm wrapped around Hernandez’ neck.

In one of the photos, standing to the left of Astaphan and Hernandez is another man that Heng identified during the preliminary hearing as Peng.

Jennifer Hammer, a Los Angeles County Police Department detective in the Robbery-Homicide Division, testified in the preliminary hearing that she recovered cell phone records from Astaphan’s phone which was taken at his arrest on Nov. 19, 2020.

Hernandez’ body was found on Nov. 15, 2020, using cell tower evidence to track the route taken to the Mojave desert.

Before the start of the May 3 hearing, Hernandez’ mother, Yajaira Hernandez, expressed her exhaustion and frustration with a long process that makes her healing difficult.

“I think there’s no such thing as justice… We kid ourselves and say we’re fighting for justice, but in reality, we’re just fighting for these individuals to obtain punishment,” Yajaira Hernandez said. “In my case, so my son’s death wouldn’t be in vain, I would force them to take classes to understand how to become better, so they can realize firsthand the damage they did to us… and understand the severity. It wasn’t just that you murdered our loved ones. You altered our future forever.”

Yajaira Hernandez also shared her perspective on crimes like this.

“I don’t think people understand that,” Yajaira Hernandez said. “They only think for themselves, because that’s what that moment was, that moment of rage where they are thinking of their needs, their wants, their desires and not thinking of how that action will impact not only that person, but their whole family and community.”