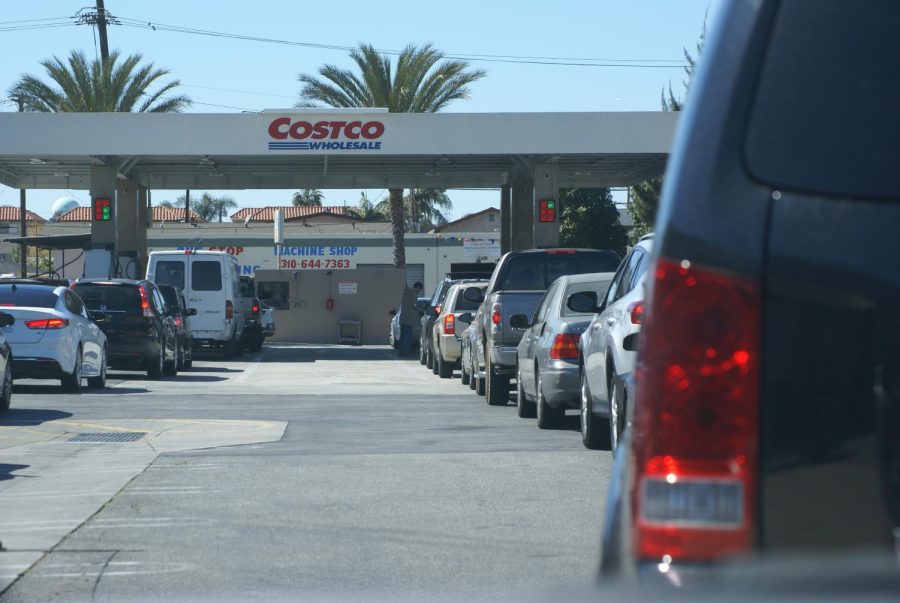 A Costco Wholesale store's gas station sees long lines of cars on a consistent basis in Hawthorne California on March 8. After the Russian invasion of Ukraine, gas prices in the U.S. have seen an increase. The price of gas reached record highs of just over $6 per gallon as recently as March 28. (Alexis Ponce | The Union)

That was until gas prices saw an increase throughout the state of California.

The 19-year-old Computer Science major at El Camino College now spends his time making sure that every last drop in his gas tank counts, commuting only to-and-from essential locations like school, work and home.

Suhail said that his commute can take up to 30 minutes in traffic from where he resides in Rancho Palos Verdes to El Camino College. Filling up his gas tank takes up the majority of Suhail’s paycheck from his minimum wage job.

“I commute to El Camino three days a week and am working a minimum wage job so having to pay almost six dollars a gallon takes a huge toll on my paycheck,” Suhail said.

Other students at El Camino agree with Suhail, such as 19-year-old Political Science major, Caesar Chacon, who splits gas payments with his father.

“Everyone I know has complained about gas,” Chacon said.

Samantha Alvarez, a 19-year-old Psychology major, said she is not looking forward to driving because her mother drives the hour-long commute to drop her off and notices the consequences it has on her gas tank.

However, some students like 18-year-old Liberal Studies major Marley Garcia, who drives her own car, said that the gas prices do not affect her because of her well-paying job as a server at islands Restaurants.

“I don’t let [gas prices] affect me because money is just a concept,” Garcia said.

According to AAA Gas Prices, the current average price of gas in the state of California is $5.808 per gallon for the lowest grade and upwards of $5.940 specifically in Los Angeles County.

Compared to the national average of $4.164, the state of California has the highest gas prices on average in all of the United States, reaching record highs of just over $6 per gallon as recently as March 28.

El Camino College Professor of Economics, Tanja Carter, said that many factors are generating the inflation of gas prices in the country, one of them being the recent Russian invasion of Ukraine.

“The most recent increases are clearly due to the recent invasion of Ukraine which is resulting in a reluctance to rely on Russian oil,” Carter said.

Carter said that Russia is one of the largest oil and gas exporters for the globe and that the most recent sanctions on the country have affected the global price which in turn results in higher prices at gas stations.

“For the students who don’t live locally, it’s a big deal when you fill up a tank of gas that could be a huge jump well over $20 to $30,” Carter said. “Students are going to have less money for food, less money for books and less money for spring vacation.”

While the increasing gas prices are negatively affecting students, those who work at local gas stations around El Camino are also feeling the pressure.

Jaime Galeas, a 22-year-old gas station attendant at the Chevron on Artesia Boulevard and Prairie Avenue said that he struggles with customer service when people walk into the station in an angry mood.

“While working here you need to have a lot of patience and be nice to the people walking in,” Galeas said.