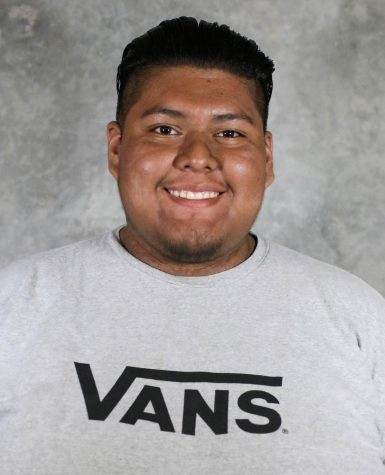 Miranda smiles for a staff picture for The Union in fall 2019.

Editor-in-chief of Warrior Life Magazine, Juan Miranda died on Jan. 22 at the age of 22. At the moment, the official cause of death is unknown, but family believe it may be due to a blood clot in his lung.

Miranda joined the journalism program in the spring of 2019, where he began to excel far beyond any expectation of him, journalism and english professor at ECC, Kate McLaughlin said.

“At the end of that semester, the person I thought who was maybe the most tender and might need the most help, [wound] up being the valedictorian of that class, and [his] sensitivity and softness wound up being his greatest strength, and a perfect fit for journalism,” McLaughlin said.

Despite being naturally introverted, Miranda’s tenacity allowed him to succeed in his journalistic pursuits. Over the course of his time at The Union, Miranda was recognized on the local, state and national levels as well as being honored by the journalism department’s own Jolene Combs memorial award, the department’s highest honor.

“One thing about me you should know is that it is very difficult for me to give up. In other words, no matter how overwhelmed I become, or how tough a situation will get for me, I will continue to strive for success.” Miranda wrote in a student questionnaire when he first joined Journalism 1.

The primary driving factor in Miranda’s journalism was humanity, which showed through in his coverage of ECC and the community it encompassed, Omar Rashad, former Editor in Chief of The Union and current lead data and investigations reporter at Mustang News said.

“He had this gift. And he had this understanding of journalism that so many people don’t know they need to have,” Rashad said. “You can train somebody to be a good writer, [but] you can’t really teach someone to be empathetic.”

In his editorial positions, Miranda led the same way he wrote, with compassion and intention.

“It’s a rare student who comes along with the level of care and professionalism that Juan provided not just in writing stories and reporting, but [as] a leader in the newsroom,” Stefanie Frith, journalism professor at ECC said. “And he was a leader before he technically had an editor position, [other students] looked up to him and I think that’s why he had the immediate respect of his peers.”

Inside and outside of the newsroom, those who were friends with Miranda say they will remember his humor and ever-present smile along with his loyalty and unwavering friendship.

“He was like, just the best friend you could ever really have in a newsroom. [He] had the sense of intentionality of checking up on you. He had this sense of humor that just put a smile on your face. And he just walked into the newsroom willing to help out, willing to work on stories and just get to work,” Rashad said.

Miranda will leave ECC with a legacy of devotion to community, readership and genuine truth.

“His legacy is as a community oriented unifier, a team player [and] a lover of people and community,” McLaughlin said. “And I think that’s a lesson I hope that all of his peers and colleagues will carry forward and emulate in their own lives.”

Miranda’s family have organized a GoFundMe page to help cover the cost of the funeral, which has not yet been scheduled.

This is a developing story, please refresh for the latest updates.