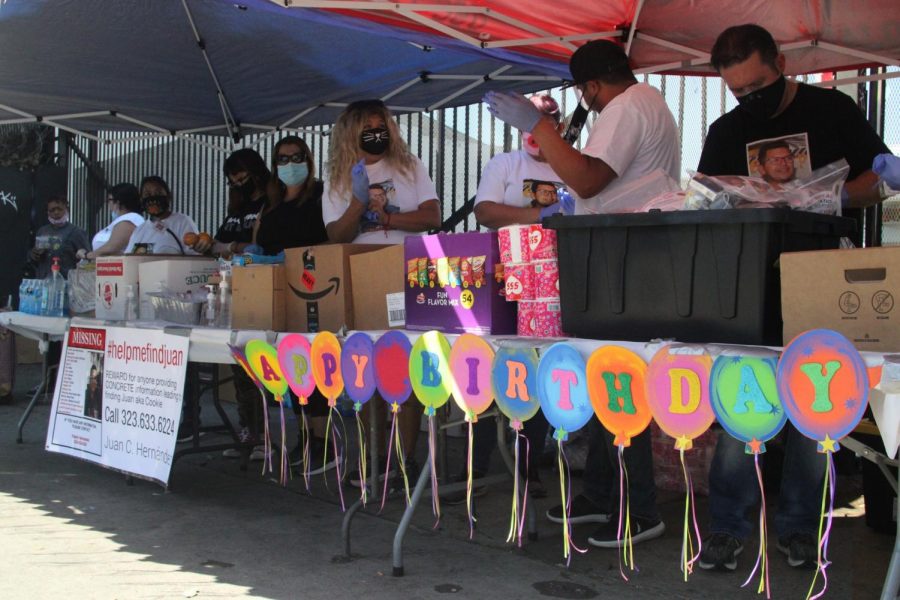 Juan Carlos Hernández, a part-time engineering student at El Camino College, has been missing since late evening Tuesday, Sept. 22. In honor of his birthday, his family decided to give back to the community on Thursday, Oct 15, setting up tents on the corner of San Pedro Street and Seventh street in downtown Los Angeles to distribute some food and toiletries to the homeless residents of nearby Skid Row. Image taken Thursday, Oct. 15. (Jaime Solis/ The Union)

By Juan Miranda and Jeniffer Torres

For roughly one month, family and friends of Juan Carlos Hernández, a missing engineering student, have been looking for him with few leads to aid them. Now, they are giving back to the community who has helped them in their search.

On Thursday, Oct. 15, around noon on the corner of San Pedro and seventh street, the Hernández family, along with friends and volunteers, set up tables and organized an assembly line to feed the homeless community in the Skid Row area, using some of the funds they received in their GoFundMe.

“Since we’ve been heavily talking with them [the homeless], we decided it would be a sort of good idea to give back to them because they’ve never asked for anything in return,” Joseph Hernández, Juan Carlos Hernández’s older brother, said. “And so this is how we decided to celebrate and honor my brother.”

The Hernández family worked fast and strategically, turning towers of cardboard boxes into an orderly line of free supplies while a line patiently formed on the side. A banner printed with Juan Carlos Hernández’s missing person flyers hung from the main tent with a smaller foam balloon banner beneath it reading: “HAPPY BIRTHDAY.”

Juan Carlos Hernández was last seen around 10 p.m. on Tuesday, Sept. 22, by a coworker after their shift at a South Los Angeles cannabis dispensary ended. His 22nd birthday was on Oct.15, the same day his family hosted their Skid Row event in his honor.

“[Juan] was really involved in multiple running communities within Downtown that would run one day a week. They didn’t just run together, but they performed community services together,” Joseph Hernández said.

Yajaira Hernández, Juan Carlos Hernández’s mother, said this type of community work is something the family is familiar with, engaging in similar services with local running and church groups.

She said her family had done a similar event on her birthday in December, and she knew this was how her son would’ve liked to celebrate his birthday.

Once the event was set, Stephanie Mendoza, Yajaira Hernández’s sister, started a livestream while volunteers guided the line to the table. One by one, each homeless person was given a bag filled with food and supplies.

The Hernández family provided them with first-aid kits comprised of deodorant, nail clippers, pads, lotion, anti-bacterial gel, washcloths, and more. From there, they were given toilet paper, chips, fruit snacks, mini muffins and fresh fruits and water, among other things.

“I know it’s not a lot, but it’s something,” Yajaira Hernández said.

A smaller missing person flyer was included in every first-aid kit for future reference. Yajaira Hernández said any leftover supplies would be donated to a nearby mission.

Charles Johnson was one of the people who lined up for the supplies.

“[I] really needed it because I’m out here homeless. They’re providing some things I couldn’t provide myself,” Johnson said.

As they exited the line, several people, including Johnson, turned back to thank the volunteers and ask about the person on the banner.

“It’s a good feeling, really,” Johnson said. “That we know people outside of this area are coming down here […] and giving us hope for the next day.”

Yajaira Hernández and her sister stepped aside to talk to those inquiring about Juan Carlos Hernández, describing his height and weight, or how they can contact the family with any tips. They mentioned there’s now a $50,000 reward for anyone with credible information.

Prior to the distribution event, Yajaira Hernández was tired of being left without answers by the LAPD. She said she took her demands to local elected officials but was told by the LA City Council that they couldn’t offer a reward to anyone who helped find her son, as the case is not considered a criminal investigation.

Yajaira Hernández said discrepancies in information regarding her son’s case have left her frustrated. She wishes local politicians would honor their word of “serving the people” by doing more to help find her son.

LAPD’s original community alert regarding Juan Carlos Hernández’s disappearance incorrectly noted he was last seen on Sept. 26 around the 3200 block of West Adams Boulevard in Los Angeles. The community alert remained on the LAPD website for several days until a correction was later issued on Oct. 1.

Yajaira Hernández said that LAPD has also declined to update her family on anything involving the case.

LAPD has visited VIP Collective LA, the cannabis dispensary Juan Carlos Hernández worked at, multiple times, and also moved Juan Carlos Hernández’s case to the Robbery and Homicide Unit. The Union called LAPD Media Relations for comment, but they declined to comment on the visits or when the case was reassigned.

Alex Traverso, a spokesman for the Bureau of Cannabis Control (BCC), confirmed VIP Collective LA is currently operating without the proper state licensing. Therefore, the dispensary is considered illegal.

Although businesses without a license are considered illegal, Traverso said it does not mean VIP Collective LA isn’t currently waiting for a license or plans to apply for one.

The legal repercussions for operating an illegal cannabis retailer depend on the exact situation at each location, as well as whether the district attorney decides to charge the offenders.

“In my experience, it’s been very difficult to bring charges against anybody because it’s very hard to find the owner at times,” Traverso said.

Usually, law enforcement has to question employees of the business to find the owner, he added.

“Even if you try to shut them down and close the doors, unless you find the owner and can get the owner out of the picture, the shop has a very high likelihood of reopening,” Traverso said.

A complaint must first be filed to the BCC before a search warrant on an alleged illegal retailer can be carried out. Afterward, the bureau opens a case file and investigation and dispatches an undercover detail to “learn more about the ins and outs of the business,” Traverso mentioned.

When a search warrant is obtained, everything inside the business, including cash registers, safes, furniture, monitors and products, gets taken. The door is then sealed with plywood and the power to the location is cut off.

“The problem is, people can get a generator, they can take the board off the door, they can bring more product in there, they hire new people and bring them back in,” Traverso said. “It’s ultimately a difficult process to shut people down for good.”

Traverso stated that the illegal market has the resources to resume business soon after being served a search warrant.

“The folks that own these illegal shops don’t do many things by the book,” Traverso added. “As best as they possibly can, they try to keep a low profile to themselves while keeping the business open to the general public.”

The Hernández family has continued its intensive search by passing out flyers, organizing small search parties, and talking to city council members. The family also plans on continuing to hold similar supply distributions for displaced residents in Downtown LA.

Yajaira Hernández and her family have launched a website designed to help other families in similar situations find resources and information on actions to take or who to talk to, as she found the LAPD to be unhelpful in walking her through the process.

Exhausted and determined, Yajaira Hernández said she would take further action to ensure both the city and LAPD hear her voice.

“If I gotta protest, then I’m gonna go out and protest,” she said.