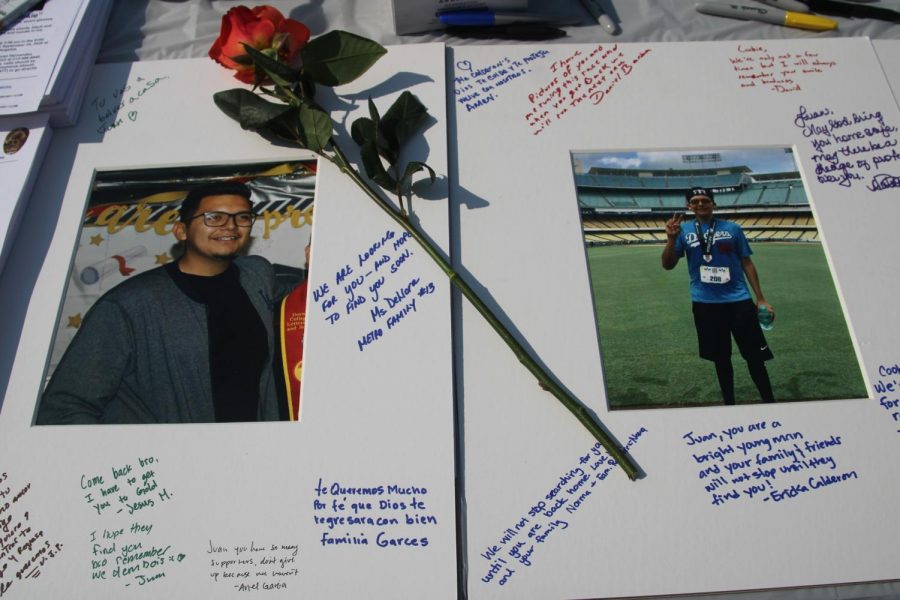 A vigil was held for Juan Carlos Hernández, in Martin Luther King Jr. park on Sunday, Oct. 4. Juan Carlos Hernández has been missing since Sept. 22, last seen by a coworker as he got off his work shift. Guests from all walks of Juan's life were invited as a testament and reminder that the search for him will not stop. (Jaime Solis/ The Union)

By Juan Miranda and Jeniffer Torres

The last time he was seen was by a coworker after their shift at a dispensary in South LA ended at around 10 p.m. on Tuesday, Sept. 22.

Yajaira Hernández, Juan Carlos Hernández’s mother, remembers waking up the morning of Sept. 23 and panicking when she found her son was not in his room and that her car, which he’d borrowed to go to work the day before, was missing.

“I got scared. I was worried. I was freaked out,” Yajaira Hernández, an employee of the Department of Social Services, said. “I knew something was wrong because it’s not in [his] nature not to come home.”

Yajaira Hernández noted her son was always in close contact with her and would always let her know when he was with friends or when he would be heading out of town. He’d made it a habit to send her a message when he was heading home from work, as well.

“It’s been a horrible past [number of] days. I’m not sleeping; I’m not eating. His family’s so distraught,” Yajaira Hernández said.

The night Juan Carlos Hernández went missing, she received a message from him saying he’d be home soon. That was the last time she had any contact with her son.

Yajaira Hernández maintained that this circumstance was out of her son’s character since his phone was always charged, but that morning all her calls went directly to voicemail.

Following her sister’s advice, Yajaira Hernández began filling out a missing person’s report that same day. She said LAPD was initially resistant to open an investigation on her son’s disappearance, implying he’d run away and had no obligation to stay in contact with her.

Two days after her son’s disappearance, Yajaira Hernández received a phone call from LAPD at approximately 3:30 a.m. Police had found her car, a 2020 Honda Civic, near Figueroa and 64th Streets, only a few miles from the dispensary Juan Carlos Hernández worked at.

The car was found still running and with no damages. Sex workers in the area reported the vehicle had been abandoned for hours before police arrived.

“All of my sister’s personal belongings: money, jewelry, devices were inside. Being that it’s a new car, it’s odd because in that area it’s really hot. It’s known for prostitution, it’s also known for bad activities, and also [to] drop-off cars,” Stephanie Mendoza, Yajaira’s sister, said.

The only things missing from the car were Juan Carlos Hernández’s personal belongings.

“My car was in mint condition. I usually leave my work stuff in the car. I had money in there. I had my Fitbit watch. I mean, everything was in place,” Yajaira Hernández said. “However, there was no sign of Juan. His cell phone wasn’t there, his wallet wasn’t there. Nothing was there… it’s like he never drove my car.”

The case has now been moved to LAPD’s Robbery-Homicide Unit. Anyone with information regarding the disappearance of Juan Carlos Hernández should contact them through via phone number (213) 486-6840 or email [email protected]

Juan Carlos Hernández’s aunt visited VIP Collective LA, the dispensary he was employed at, the day after he disappeared but said the workers were unhelpful. When she asked about their security camera footage, they told her it deleted itself after 24 hours.

“I went to apartments in the corner, businesses near the area and they wouldn’t want to give information about their footage,” Mendoza said.

The Union attempted to contact VIP Collective LA over the phone three times, but every call and voicemail went unanswered.

Jose Hernández, Juan Carlos Hernández’s father, said he’d usually hear him get back from work every night and go to the kitchen or to bed. He said his son lived a private life and never made a comment regarding his workplace, where he’d been employed for six months.

Jose Hernández said he left work early the day he realized his son was missing and hasn’t returned since. None of Juan Carlos Hernández’s immediate family members have gone to work since his disappearance two weeks ago.

Juan Carlos Hernández was better known as “Cookie” in the local community, a nickname given to him by his older brother, Joseph Hernández, when they were young children. Joseph Hernández said that as a child, he could not pronounce his brother’s middle name and kept repeating “Cookie” instead of Carlos, eventually it became a family norm.

Joseph Hernández, USC graduate, and now a student program advisor at his alma mater, said the community response to his brother’s disappearance has played a central role in getting LAPD to investigate his brother’s case.

“People have seen him on the news, people have heard of him from online now, and it’s only because of the help that we’ve gotten outside of our family,” he said.

The day after his brother went missing, Joseph Hernández received a call from his concerned mother and assured her that Juan Carlos Hernández was probably out with friends, but by the second call, a few hours later, he knew this behavior wasn’t normal.

“Wednesday and Thursday was the minute we knew something was wrong, and we pushed it as much as we could, and instantly, friends, family, community members that we don’t even know [started] reaching out,” Joseph Hernández said.

Search parties have assembled, banners have been created and hung on freeway overpasses, and flyers have been printed and posted in several locations across L.A. in an attempt to find Juan Carlos Hernández.

Online, several posts accompanied by the hashtag #HelpMeFindJuan were posted on social media platforms, including Instagram, Facebook and TikTok. A GoFundMe account was started by Juan Carlos Hernández’s family to assist with the production of posters and banners.

She believes the local community’s response is due to her son playing a significant role in others’ lives. In high school, Juan Carlos Hernández was part of several programs that served the community and helped pass out meals to families in need or feed the homeless.

He’d also been involved with the USC Neighborhood Academic Initiative (NAI) program since the sixth grade.

To have the level of support and response from the community during the COVID-19 pandemic “truly means the world” to Yajaira Hernández, as many have exposed themselves to gathering in search parties, speaking to passersby and the homeless population while in search of her son.

“It makes us feel so blessed to know that, even in these tough times, people are not just sitting back and putting their fears first. They’re putting their fears to the side in order to help us and our family,” Yajaira Hernández said. “That’s something that I’ll never be able to pay any of them back. It’s a blessing to have so many people fighting [in] our corner.”

Aside from monetary donations, the Hernández family also received coffee donations from the Starbucks LA district manager, and candles from a friend for the vigil they held on Sunday, Oct. 4.

Former President of the Los Angeles City Council, Herb Wesson, was thanked by Joseph Hernández on the GoFundMe page for providing his family with groceries and donating supplies.

At the vigil, four children offering masks and roses greeted each attendee. Family members took turns speaking to those who have helped in the search for Juan Carlos Hernández and led them in communal prayers.

Afterward, they signed posters of him for the family while the children continued to pass out roses.

All of Juan Carlos Hernández’s family notes that this behavior is highly unusual from him and that the community must show strength to ensure LAPD continues their investigation.

“I can attest that Juan going missing might not be his voluntary wish,” she said.

Yajaira Hernández said she’s come up with “a million scenarios” in her head, but ultimately, does not know what happened to her son.