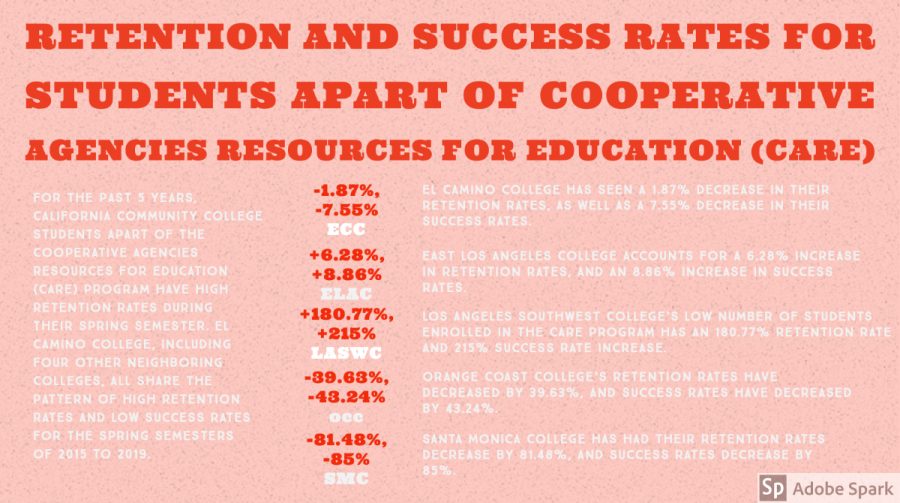 California Community College Chancellor’s Office (CCCCO) Data Mart has accounted for the retention and success rates of five community colleges, including El Camino College, from the spring semesters of 2015 to 2019.

Students in the Cooperative Agencies Resources for Education (CARE) program at some community colleges, including El Camino College, have had high retention rates and lower success rates during their spring semesters for the past five years.

Retention and success rates of students in the CARE program at ECC, Santa Monica College, Orange Coast College, East Los Angeles College and Los Angeles Southwest College have had high success rates from the past five years, according to the California Community College Chancellor’s Office (CCCCO) Data Mart, but the retention rates have prevailed.

According to the CCCCO’s Datamart, a system that “provides information about students, courses, student services, outcomes and faculty and staff,” the following colleges have accounted for such retention and success rates during the spring semester from 2015 to 2019:

Noticing the fluctuating percentages of these retention and success rates, the lack of representation of CARE students is not overlooked. These students are in the pursuit of achieving higher education, while their job as a single-parent does not stop.

These students push forward with a heavy load on their plates, while school and parenting are just the tip of the iceberg to each of these individuals’ situations. Along the road to success, many of these students face tremendous obstacles.

“There’s a lot of hardships that the CARE students kind of experience more than any anyone else, you know?” Breeanna Bond, CARE advisor at ECC said. “Homelessness is a big one. We do have homeless families, and we do have people that were recovering from either substance abuse, sex trafficking and/or they were in prison. I think at a higher percentage within the CARE program, they’re overcoming those issues,” Bond said.

AB 540 mothers are also students within the program, and ECC’s CARE program is composed of 98% female students, the majority of them being Hispanic and Black, Bond said.

Domestic abuse and violence is another large component of the struggles that CARE students at ECC endure. The college’s CARE program has a partnership with Harriett Buhai Center for Family Law which is located within the Los Angeles area. They provide CARE students in need with aid by giving them free legal advice, Bond said.

With these factors encapsulating a large portion of ECC CARE students, if not all of them, it is no doubt that their academic performance can be affected by them. Having to tend to and complete school responsibilities amidst each students’ unique situation can undeniably have an impact on their grades.

“On top of school, they’re dealing with also being a single-parent,” Bond said.

Coinciding with ECC’s CARE students, OCC also shares similar forms of struggle with their own students.

Shannon O’Neal, the EOPS/CARE Specialist at OCC, shared what the school’s CARE students have typically experienced while navigating academia in higher education.

“Poverty in itself and not having a support system, and then all the outside issues of mental health,” O’Neal said can be contributing factors to the high retention and low success rates for CARE students at OCC.

Managing their children, job, duties and school responsibilities can make it extremely strenuous for these students.

“It’s difficult, you know, if they’re a worker… they feel rushed figuring out what they need to do in the amount of time that they have. Basically picking the wrong major and having to be stuck in it, because that’s what the county requires,” O’Neal said when explaining how these students’ non-academic responsibilities can clash with their school duties.

OCC’s CARE program aims to create and build a sense of community amongst their students so that they can want to be involved in the program as opposed to needing to be involved in it in order to receive the resources their CARE program provides. Ultimately, providing these students with what they need while enrolled in multiple classes is what is essential.

“They’ll request things they need, so we try to have workshops to meet those needs. If they need resources to fix their car, we have someone come in to teach them those things,” O’Neal said as she recalled instances in which CARE gave their students the assistance and provisions they were in need of. “Anything they say they need, a lot of self-care, a lot of art therapy,” O’Neal said.

Despite these college faculty members providing information they’ve gathered throughout their time working in the CARE program, the realities of these students’ experiences can only be described by an outsider’s limited documentation of it.

The narratives that these single-parent community college students carry can only be truly conveyed by their own voices.

“I’ve been empowered through this program,” Isabel Gonzalez, a former ECC CARE recipient and current CARE Success Coach at ECC, said. “I started going to school because I was a victim of domestic violence. So basically, when I started receiving therapy, GAIN gave me an option. Of course, GAIN gives you an option, ‘what do you want to do?’ And I told them, ‘you know, right now I need support. I’m not mentally okay.’”

Greater Avenues for Independence (GAIN), a program that “provides employment-related services to CalWORKs participants to help them find employment, stay employed, and move on to higher-paying jobs,” referred Gonzalez to 1736 Family Crisis Center, an organization that provides “necessary tools to develop safe, self-sufficient lives, focusing on domestic violence victims, runaway and homeless youth, and community members who need extra help to create stable lives.” 1736 gave Gonzalez the option of choosing to go into the workforce or attending school.

“I said, ‘You know, I would prefer to go to school and help other women recover from what I’m recovering from,’” Gonzalez said. She then became a Warrior at ECC and became a part of the CalWORKS program, in addition to getting a job at ECC’s Transfer Center.

“I just remember the services that I was receiving from CARE. I’m like, ‘I would want to offer more to the students. It’s a single-parent program and I’m pretty sure [there are] other women that have gone through what I’ve gone through and I don’t see that program giving it.’”

Once Bond hired Gonzalez at the CARE program, Gonzalez became comfortable enough to choose to vocalize her experience with domestic abuse, empowering her even more. The program even made her the face of one of their posters centered on domestic abuse. “The fact that I was able to open up and that they saw strength in me, they were able to build me up and use me as like the poster,” Gonzalez said.

Gonzalez recalled how both the CARE and CalWORKS programs provided her with support in listening to her when she needed to vent about what she was going through, as they took their time to be empathetic and actually listen to what she had to say. As she continued to navigate and survive the domestic abuse she and her daughter went through, CARE provided her with a sense of familial support.

“That’s why I give it back to students, because I could see how important it was because they gave me that time. Having their support and them always telling me that I can do it, that I’m not a failure, it was really important to me and it really it made me feel like I had a family,” Gonzalez said.