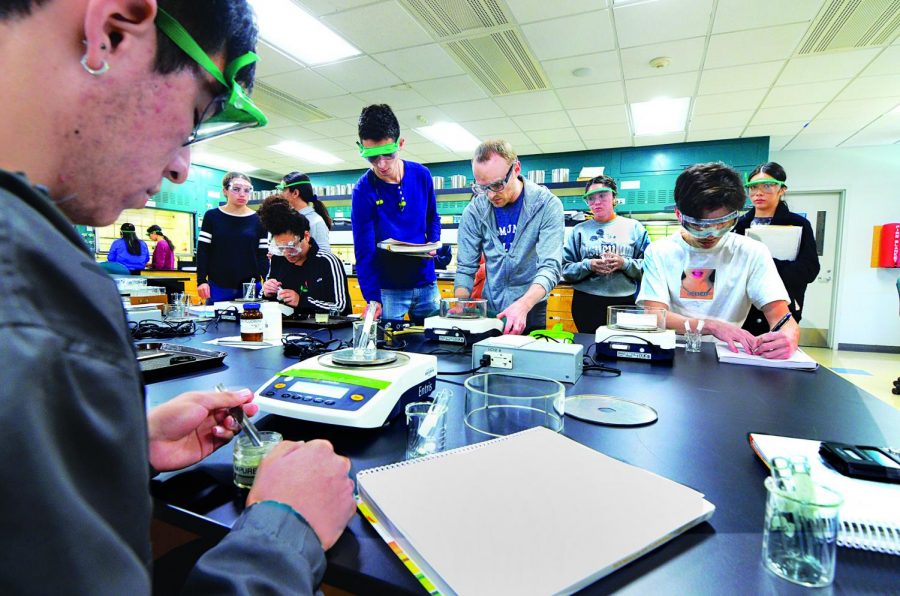 El Camino College chemistry professor Troy Moore, background center, works in the lab with students in one of his Monday organic chemistry classes. Some campus faculty are complying with contract regulations on enrollment size per class, as 2020 faculty contract negotiations continue. Duane Tada/Special to the Union

Moore said a lot of the issues facing professors and students are really difficult to fix in one semester but this is not a one semester problem that crept up all of a sudden.

“For a long time, kind of the default assumption is that faculty will absorb any of the extra students who are on the waitlist,” Moore said. “Generally speaking, we’re more than happy to do that but there are a lot of negative externalities that are not super obvious.”

But the larger a classroom grows, the worse the learning environment becomes as students don’t receive enough one-on-one time with the instructor, Moore said.

Moore, who is also the Vice President of ECC’s faculty union, said he never takes students over his course’s capacity as it creates an unsafe environment along with limited lab equipment.

“It becomes increasingly difficult to do a good job when you’re not supported in your environment,” Moore said.

As demand for classes increase at ECC, students are placed in precarious positions when stuck on waitlists that have become longer over the years, Moore said.

“It is really stressful and disheartening and hard to tell students I’m sorry, I know you applied to medical school but there are 10 people ahead of you in line in your position too,” Moore said.

Izack Saucedo, political science major, experienced the brunt of this when he tried adding a political philosophy class during the first week of the spring 2020 semester.

When he arrived to class, Saucedo said his professor quickly established that he would not be adding anyone on the waitlist as he did not want to go over the course capacity.

“He made it really political because he gave his reasons. He’s like ‘I’m part of the [teachers] union’ and I didn’t really understand a lot of what he said because it was very political so I was lost and a lot of other students were lost,” Saucedo said.

Because Saucedo was waitlisted, he and another student began looking for other class sections of political philosophy at ECC and visited Dean of Behavioral and Social Science Christina Gold.

“We talked to the Dean and she couldn’t do anything because the administration would not allow them to add another specialized class,” Saucedo said.

Gold proceeded to show the students an online database where they could search for available sections at other colleges, Saucedo said.

“I also thought that was kind of weird too because as a dean at El Camino, she should be encouraging us to stay on campus but she was kind of like pushing us out,” Saucedo said. “It kind of went against the whole, ‘we want you to be successful here at El Camino.'”

Saucedo, who is also the Associated Students Organization commissioner of academic affairs, said this situation put him at a low point as it added unwanted stress to an already hectic first week of classes.

Ultimately, Saucedo said he managed to be added into the class but considers himself lucky.

“As a student you shouldn’t be put in the middle and fight out situations like this,” Saucedo said. “Administration should be proactive to potential issues like this and try to put in some kind of resolve and solution to issues like this.”