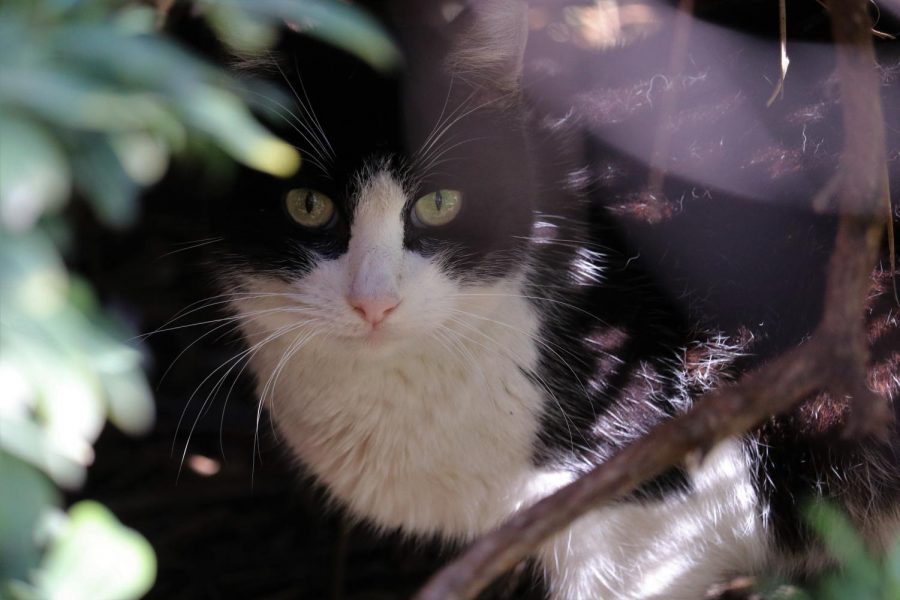 A black and white cat peers out of a bush next to the Schauerman Library on Wednesday, Feb. 19. Cats at El Camino College have historically controlled the rodent and mice population on campus. Omar Rashad/The Union

Following rumors that officials may consider getting rid of felines on campus, a classified employee gave a presentation about cats that reside at El Camino College during public comment of a Board of Trustees meeting on Tuesday, Feb. 18.

Debbie Turano, senior clerical assistant with the Facilities Planning and Services Department, gave a brief history of cats in the ECC community and explained how they are an integral part of the campus.

“I think it’s very important because we don’t want history to repeat itself,” Turano told The Union. “I don’t want to come into a building and open up my desk drawer and there’s rat feces inside or in my file cabinets and that’s what’s happened in the past.”

Turano heard about a recent Workplace Health and Safety Committee meeting in which the Vice President of Administrative Services Iris Ingram talked about possibly instituting the removal of cats on campus.

However, after talking with Ingram further, Turano said that the rumors were a misunderstanding and all that was discussed was a “cat problem” which may cause a health and safety issue.

Ingram refused to comment on the matter when approached by The Union but did explain that as Vice President of Administrative Services, she directly oversees the financial and physical health of the ECC campus and her responsibilities include overseeing facilities, health and safety issues.

Regardless of what was discussed at the recent Workplace Health and Safety Committee meeting, Turano said she wanted to go to the Board of Trustees (BOT) meeting to educate ECC administration officials of the history of cats at El Camino and what volunteers do to take care of them.

Turano also explained the role of the El Camino Cat Care Volunteers, a group comprised of about 50 people who take care of cats on campus by feeding them and also giving them necessary shots and flea treatment. They also provide trap neuter release (TNR), a program in which cats are trapped, spayed or neutered and then released back onto campus, Turano added.

She said that if cats were to be removed from the El Camino campus, we would see history repeat itself in regard to having a rodent infestation.

In 1988, ECC administration officials headed a program to remove all cats from the El Camino campus, according to The Warwhoop archives.

Two years later, the campus was overrun with a rodent infestation in which rats could be found in buildings, between walls, on telephone wires and their urine and feces were found in desk and cabinet drawers, Turano said.

Beyond preventing a rodent infestation, Turano added that the cats are a part of the El Camino community.

“There are a lot of students that find the cats as stress relievers,” Turano said. “They enjoy watching them play and there’s friendly ones on campus that I’ve seen people sitting down [with] and petting.”

Executive Director of the Facilities Planning and Services Department Jorge Guttierrez also refused to comment on the matter. His responsibilities include overseeing custodial work and groundskeeping at ECC.

The Union attempted to reach the office of Michael Pascual, the director of Purchasing and Risk Management and also the chair of the Workplace Health and Safety Committee, however, he was unavailable for comment since he was out of town.

The Union attempted to also reach the committee’s Co-Chair Valerie Wagner, however, she refused to comment, citing how she was told to not talk to reporters with The Union.

James McCleary, who is part of the El Camino Cat Care Volunteers and stocks 18 feeding stations for cats across campus, talked about how he visits campus twice a week for over four hours feeding cats and noted how even Facilities Planning and Services employees know him by name.

He added that none of the cats on campus are feral, have mosquitoes and fleas and are completely safe to be around. However, McCleary also said that with recent removal of bushes and other greenery, cats have a lot less space to hide and reside during the daytime.