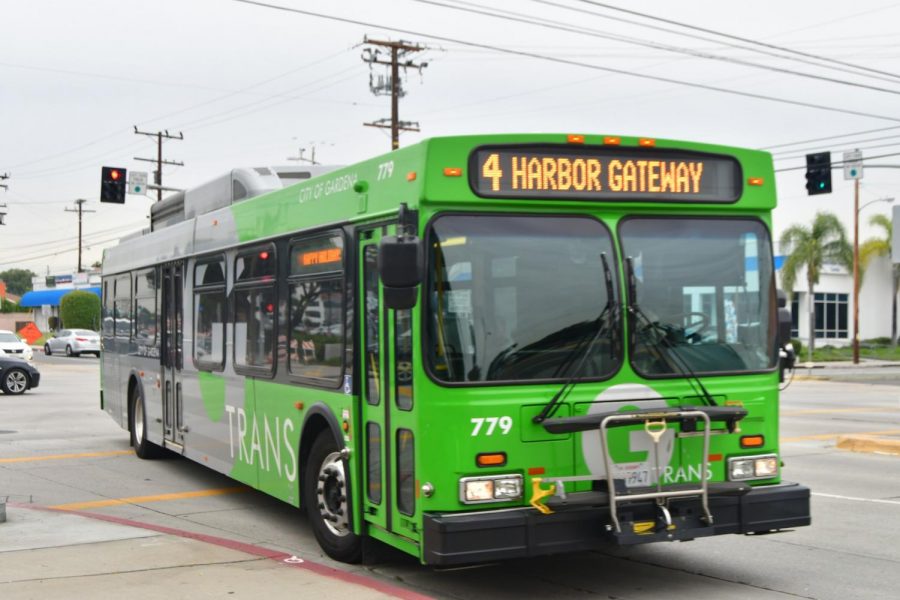 She gazed into her phone smiling with her dark brown hair in a curly loose bun as she waited for the bus to arrive. Her commute time is about an hour and a half to her East L.A. home on two buses.

Joi Featherstone, 18-year-old philosophy major, walks approximately 14 minutes from her house in the morning to the Metro line 757 for a 45-minute commute and switches buses to the 710 for another 20 minutes or so to El Camino College. She goes back the same way again in the afternoon.

The Los Angeles Department of Public Transportation (LADOT), LA Metro, and several other transit agencies have made efforts over the past five years to make public transportation more affordable for college students.

This August, LADOT launched a one-year pilot program for all LAUSD and LACCD students to ride the DASH bus for free.

A regular DASH fare is $.50 per ride. The only requirement for students is to sign up for the Metro Tap Card, which allows the students to ride for free through LA Metro’s reduced fare program. Students will also have access to a 30-day pass for a reduced fee of $24. The normal price for the 30-day student pass is $43, according to a LADOT press release.

“The reason why we thought this would be a great program for Angelinos is because we want to do what we can to reduce the transportation barriers for thousands of students,” LADOT spokesperson Nora Frost said.

Students are encouraged to explore the city of Los Angeles and enjoy further education at museums. Frost said. The pass is not only meant to help them be able to get to school but also around town.

“Part of our vision is actually to make transportation options safe and affordable to everybody with dignity and to support vibrant and inclusive communities, so that, to us, is fulfilling our vision,” Frost said.

LA Metro launched its Universal Pass (U-Pass) in 2016 for college students to provide discounted fares at a prorated price and increase college transit ridership. Rates vary depending on each college’s fare-subsidy program, according to a Metro U-Pass program fact sheet.

Metro now has more than 21 participating colleges using the U-Pass program and had 1.7 million boardings in 2016 when it launched, Metro Communications Manager Brian Haas said.

Santa Monica College (SMC) had the third most expensive pass on the list. Students have the option to purchase an associated student body (ASB) sticker for $19.50 per semester to ride the Big Blue Bus (BBB) anytime, plus a $13 student I.D. card.

65,000 to 68,000 students sign up for the ASB sticker annually, according to SMC Sustainability Manager Ferris Kawar.

No data is available yet for 2019, but Big Blue Bus reported that there has been an increase in ridership this year amongst SMC students, Ferris said.

Beginning in fall 2017, El Camino College partnered with Metro to provide discounted passes for students. The cost of the pass is dependent upon the date of purchase starting at $141.75 at the beginning of the semester in August and $26.25 in February. A $2 processing fee is charged when purchasing the pass.

There has been a 22.8% increase in U-Pass purchases from fall 2017 to summer 2019. 458 students have signed up for the pass so far this semester, according to ECC Book Store Director Julie Bourlier.

Students will need a student I.D. with ASB sticker attached to board the bus. ECC also offers reloadable Metro TAP cards for purchase at the book store. The Tap card is $2 plus the amount of money the student wishes to add, Bourlier said.

The regular Metro 30-day pass is $43 for students; 6 months would be $258. Therefore, ECC students are receiving about a $117 discount per semester. The pass can be used on breaks and shorter semesters as well. El Camino was the fourth most expensive pass out of the five colleges.

Compared to the SMC student discount, ECC is $76 more expensive for the fall and spring semesters. The reason El Camino’s pass is higher is that the price of the ASB sticker would have to increase $5 to $10 to provide a free pass, Associated Student Organization (ASO) Student Trustee Lindsay Lee said.

“We would have to raise the prices for the ASO sticker and a lot of students aren’t willing to do that,” Lee said. “We did a study on how many students drove themselves, carpooled and used public transportation and what we discovered was that it was quite a small percentage.”

According to a campus climate survey in 2018 conducted by ECC Research and Planning. 70% of students surveyed drive their own vehicle to school, while 20% take the bus. 24% said that they got a ride from someone else to get to school, while 12% used ride share services. 10% walked and 4% rode a bike or skateboard and 3% rode a train. The percent exceed 100 because they were asked to select all that apply.

Money for the U-Pass is allocated through ASO, Lee said.

“To me it’s [U-Pass] like that’s just another bill for me,” Jesicca Quackenbush, 27, ECC early childhood education major said. “I’m a single parent and I’m the only one that provides financially for my [2] children, so that’s why I work multiple jobs”.

Featherstone said that if she owned a bus pass she would use the student pass.

“I would use the U-Pass compared to the Tap because it’s for students,” Featherstone said. “I feel like it would be more beneficial.”

Featherstone’s longest commute in the morning is due to traffic, she added.

Despite efforts to make transportation more affordable, there has still been a steady decline in ridership amongst several bus lines across southern California.

“LA Metro, Orange County Transportation Authority (OCTA), Los Angeles Department of Transportation (LADOT), and the Santa Monica Big Blue Bus— accounted for 88% of the state’s ridership losses between 2010 and 2016. LA Metro alone accounted for 72 % of the state’s losses. Because LA Metro’s losses are themselves highly concentrated, a dozen routes in LA County account for 38% of all the lost ridership in California. Half of California’s total lost ridership is from 17 LA Metro routes (14 bus and 3 rail lines) and one OCTA route,” according to a 2018 study by the Southern California Association of Governments.

Bus ridership overall is declining sharply and it’s been going on for a while in California, UCLA professor of urban planning Michael Manville said.

“There has been a lot of research about travel patterns of millennials and they seemed to be driving a lot less than other generations,” Manville said.

As the economy has gotten better there has been a rise in millennials starting to drive a lot more, as well as gas prices lowering and purchasing of vehicles being more affordable, Manville said.

Fullerton College and Citrus College both had the lowest cost to students for bus passes. The passes are included in the required student enrollment fees.

The enrollment fee is $46 plus $3.50 with a valid student I.D. according to Fullerton College.

Students have the option to have the OCTA bus pass activated on the campus photo I.D. card or download the OC Bus app to their mobile smartphone. Students cannot use the pass on express routes or other transit agency buses, according to the OCTA website.

Only one credit unit is required to use the Foothill Transit Class Pass used by Citrus College. Students are automatically enrolled when they pay their student fees. The fee cannot be waived and it was voted for by the student government, Student Life Supervisor Rosario Garcia said.

Overall student ridership at Citrus College has also decreased in the last three years by 10%.

Citrus students are also able to ride Foothill Transit Local and Silver Streak lines for free according to the Foothill Public Transit Agency.

LA City College (LACC) students also use the Metro U-Pass and it is the most expensive bus pass among the schools reviewed by The Union.

The amount of the pass is dependent upon date of purchase starting from $202.50 at the beginning of the semester to $22.50 at the end. An additional $2 sticker fee will be charged when purchasing the pass.

There has been a 228% increase in pass purchases from the start of fall 2018 to the end of summer 2019, according to data from LACC.

Students will need a valid student I.D. card with ASB sticker attached to board the bus. Students can use the pass on Long Beach Transit, Torrance Transit and Gardena Transit and other participating transit lines. The Metro U-Pass is not valid on Metrolink, according to the LA Metro website.

Just about every transit agency in America has seen a decline in ridership, the decline is not unique to Metro, Haas said.

“We want people to ride Metro,” Haas said. “We have an interest in helping to develop a love for transit in people when they’re younger; if somebody has fond memories and enjoys taking transit as a kid or student they might be more likely to take it when they get older as well.”

Note: The Union reached out to LA Metro several times by phone and by email over the course of a month and a half and was not able to receive U-Pass ridership data for El Camino College or Los Angeles City College.