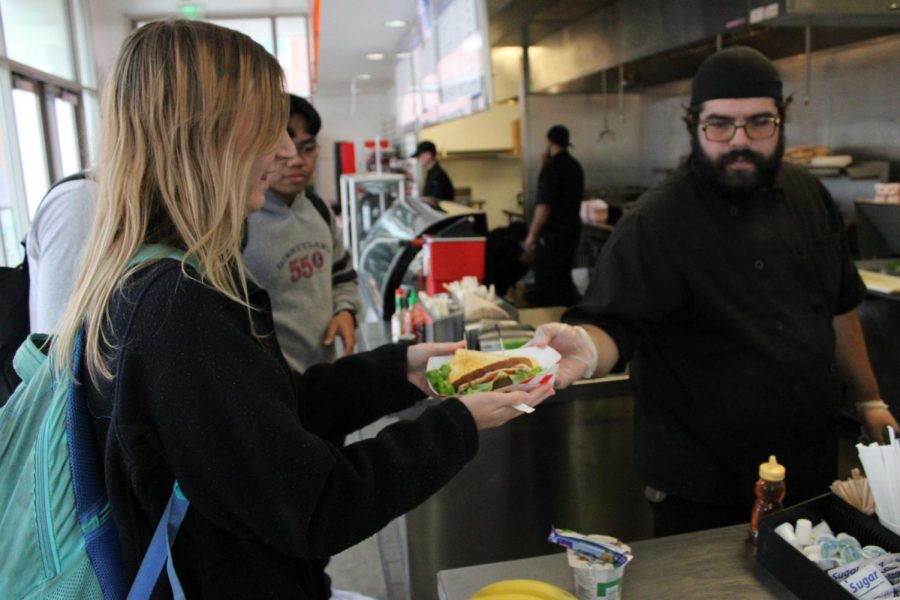 Annika Waisanen, health and exercise science major, receives her order from a worker in Cafe Camino on Tuesday, Dec. 3. The facility was given a 91% on its recent health inspection by the Los Angeles County Department of Public Health on Thursday, Sept. 5, according to its results. Jaime Solis/The Union

As hungry customers enjoy their favorite combo meal at a local burger joint, an army of birds, rodents and insects linger outside of the establishment, waiting for the opportunity to slither, peck and crawl all over the same batch of hamburger patties of which they are consuming.

While cockroaches and rats have the potential to make consumers sick, food holding temperatures and handling procedures, among many other things, can also lead to food borne illnesses.

Food handling and safety procedures in restaurants local to El Camino College are regulated by the Los Angeles County Department of Public Health (LACDPH). This department works with field inspectors to perform routine inspections of establishments to ensure public safety.

ECC’s campus has four food options available to students and faculty at various times during each school week. All four options fall under the jurisdiction of the LACDPH for health inspections.

The options on campus are: Café Camino near the Humanities building, the Art Deli in the Art Complex, the LA Mobile Catering food truck outside of the now closed Manhattan deli and the newly opened Coastal Coffees food truck located near the old Student Activities Center.

Andy Nasatir, co-chair of the ECC Food Service Committee, told the Union that the food services on campus are managed independently by Pacific Dining Company.

ECC is also located in a unique area which is surrounded by local restaurants where students and faculty typically visit for a quick bite to eat. Most, but not all, of these restaurants have high health inspection ratings according to the LACDPH records.

Other local community colleges also offer an array of options on campus. Pasadena City College has two hot food options plus a coffee cart, other local community colleges including Cerritos College, Santa Monica College and Glendale Community College range from having three to seven options on campus. This is not including vending machines and other services such as small stores.

Similarly, these community colleges are located in highly trafficked areas for food options like ECC.

The Pancake Factory received a 76% rating during a routine inspection Monday, Oct. 21 during which the field inspector found 11 violations, a 16% decrease from its previous rating of 92% during an owner-initiated inspection Tuesday, July 2. Among the violations was an 11-point major violation under the “no rodents, insects, birds and animals present” section, implying the presence of multiple vermin in the facility at the time of the inspection.

The Union was unable to receive clarification on what type of animals or insects may have been present during the inspection.

During a visit to The Pancake Factory on Monday, Nov. 18, a reporter from The Union spoke with the manager through an employee’s phone and was told that if the reporter gave the restaurant “negative press” that the 10% student discount for ECC students at the establishment would be revoked. The reporter left the restaurant after the conversation and was not allowed to photograph the establishment’s C-rating which was well-hidden inside of the restaurant next to other documentation and photos near the cash register and front door.

The McDonalds across the street from ECC received a B-rating(83%) during an owner-initiated inspection on Friday, Oct. 11 but has since improved 11% during its routine inspection on Wednesday, April 17 where it received an A-rating of 94%.

The Union made several attempts to make contact with an inspector from the LACDPH but was told by the Division Chief of the Los Angeles County Board of Supervisors, Lev Levon, that the department cannot facilitate interviews with the media. Levon added that information is “centralized” and that the department is not an expert with handling information requests over the phone. Information regarding health inspections and grading was obtained from the department’s website.

All of the cafes and food trucks on ECC’s campus have recent inspection records of greater than 90% (A), which is considered to be a superior showmanship of food handling and maintenance according to the LACDPH website.

However, despite the current inspection grade, any full-time restaurant is a “high-risk facility” and must have a “routine inspection conducted three times per fiscal year,” according to an email sent to The Union by the LACDPH Public Affairs Officer Bernard Tolliver.

During the spring 2019 semester, a reporter from The Union witnessed a cockroach running around the inside of the Café Camino location on campus. The cockroach took shelter underneath one of the soft drink refrigeration units and the reporter alerted the cashier of its presence.

Furthermore, the inspection report didn’t note any violations related to rodents, birds and/or insects present in the facility at the time of the inspection despite the reporter’s eyewitness account.

When compared to other community colleges in terms of health standards and ratings, ECC matches up closely.

Santa Monica College’s on-campus options received health inspection ratings ragning from 92% to 94% on Tuesday, May 7 during their routine inspections according to LACDPH records.

On Cerritos College’s campus, the current highest rating was a 96% rating while its lowest was a 91%. These inspections were conduced between Wednesday, July 3 and Thursday, July 25.

Pasadena City College’s campus food options lie under the jurisdiction of the Pasadena Public Health Department Boekelheide told the Union. According to the health inspection records, both restaurants on campus received an A grade ranging from 96% to 100%.

Popularity of on-campus versus off-campus options

During a small survey conducted by The Union, not all students said that they are willing to stop and eat at the ECC campus food options.

Maria Fuentes, psychology major, said that she rarely eats on campus or at the restaurant across the street.

“I’ll eat here when I have a test,” Fuentes said. “It’s more convenient.”

Leonela Gomez, business major,said that she never eats on campus because the options are “unattractive” to her.

Gomez added that there is often too many people inside of Café Camino for her to feel the need to wait in line and purchase food from there if she can prepare her own at home.

“There are too many people who come [to Café Camino],” Gomez said.

Gomez also told The Union that if ECC marketed the food options in a more attractive manner she may consider eating there although she rarely ever eats outside of her home.

“If you see something [that looks good] you want to buy it,” Gomez said.

ECC’s website also recommends local restaurants to students in the immediate vicinity of campus which include Supreme Burger Grill, Subway, Chicken Maison, Wasabi Sushiya and others.

Similarly, Pasadena City College recommends an array of different restaurants according to the college’s website. These restaurants are close to the campus, offering students and faculty options that often do not require traveling by car.

Special assistant to the Superintendent/President of PCC Alexander Boekelheide told the Union that all restaurants recommended by the college website are not endorsed by the college. He added that Pasadena City College is in a unique area for food options as the campus lies in the middle of a town.

Boekelheide said that it is common for students to go off campus to eat, but that on-campus options are also popular among students and faculty. Boekelheide could not comment about whether or not restaurants are recommended on the website based on popularity or vicinity to the campus.

Despite multiple attempts to reach a representative from Glendale Community College and Santa Monica College, The Union could not get a response from these colleges about the popularity of on-campus options versus off-campus options.

The Board of Trustees at ECC have made a plan to remodel The Manhattan deli building into a “Bookstore Cafe”, but there is currently no construction taking place on the site.

Nasatir said that some of the proceeds from the Pacific Dining Services facilities on campus are recycled to help fund projects such as the Bookstore Cafe through the ECC Food Service Committee.

“The idea is that the proceeds from food service go back to benefit students’ experience of food service,” Nasatir said.

“One of [the Coastal Coffees food truck]’s focuses is health food, vegan, alternative diets [and] things like that,” Nasatir said.

Nasatir said that vegan options, along with Kosher and Halal, are important to the ECC Food Service Committee and will continue to be looked at for future menu improvements to help meet the diverse demands of students and faculty members. ECC currently does not offer any Kosher or Halal specific options on campus for students or faculty.

Glendale Community College’s website lists a new smoothie and blended drink option coming soon to the campus. This would bring the available food options to four on its campus.

Boekelheide told The Union that Pasadena City College is currently looking into potential new options but he could not give specific examples of what types of food that are being discussed or when these changes would be implemented.

Santa Monica College and Cerritos College could not comment if there will be any new food options for students coming in the near future.