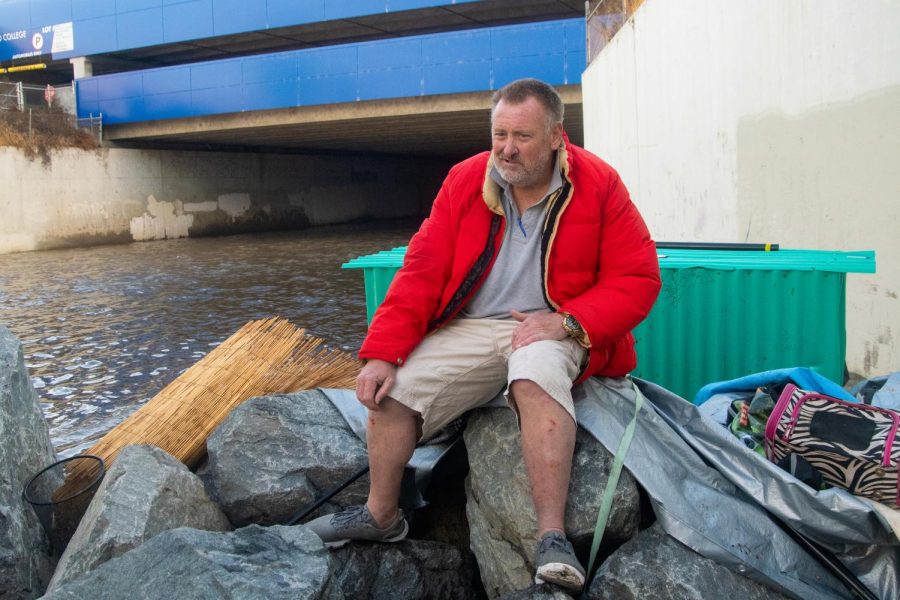 Tim Warren, 58, a Dominguez Channel resident, faces danger due to the flooding caused by a rainstorm Wednesday, Nov. 20. Homeless encampment residents face the increasing risk of accidental drowning as one encampment resident drowned in 2017 as a result of surging water levels during a storm.

Following record heat conditions in California, the homeless residents of the Dominguez Channel are expected to face a storm during Thanksgiving weekend, along with temperatures that are expected to drop into the 40s and 50s, according to the National Weather Service.

This comes after the first wave of a storm that struck Los Angeles County with rain, thunder and hail during the morning hours on Wednesday, Nov. 20, adding to the perils the encampment residents already face.

By the time the storm subsided on Wednesday, residents of the encampment who sleep in the watershed located under Parking Lot F at El Camino College, moved to higher ground as the channel waters began to rise.

They relocated their tents and belongings into the access ramp of the channel, where the Los Angeles County Public Works Department had previously placed large clusters of boulders to deter the residents from setting up camp.

1047 homeless individuals’ deaths were reported in 2018, according to a report from the Los Angeles County Department of Medical Examiner-Coroner. And between 2013 and 2018, deaths have risen 48.8% with a total of 4,658 homeless individuals’ lives claimed as a result of a various factors including accidental, natural, substance abuse, suicide and homicide.

Accidents are by far the biggest cause of death for reasons ranging from drug overdoses, traffic accidents and drowning, according to Kaiser Health News (KHN).

One third of those who lost their lives passed away in hospitals, but even more died in street alleyways, freeway on-ramps, sidewalks, parking lots and riverbeds, according to the report.

Every six months the Los Angeles County Sheriff’s Department and the Department of Public Works have conducted cleanups and forced the removal of the Dominguez Channel residents in an effort to clear the area after local residents have complained about their presence there, according to an article published by The Union in March 2019.

“I don’t think we were really an issue until our friend passed away down there,” Eunice, a Dominguez Channel encampment resident who declined to provide her full name, said. “Everyone called him A.J.,” she said following a long pause. “But that’s a long story—I really don’t want to go into that right now.”

The death involved the accidental drowning of Alming Jason Dakers, 37, in January 2017. Dakers and his girlfriend were swept away by the 35 mph current that surged through the watershed following a downpour similar to the one on Wednesday, Nov. 20, according to the Daily Breeze.

Dakers’ body was discovered floating in the Port of Los Angeles a couple of days later after initial rescue efforts proved unsuccessful. The woman was never identified by name but she survived according to the Los Angeles Times.

Dakers’ death illustrates the dangers that accompany the homeless population across L.A. County streets, where in recent years they have been dying in record numbers.

Although homicide numbers were tallied at 222, a smaller number compared to accidents, The Union published an article about an August shooting incident in the Dominguez Channel when an unidentified man was shot twice in the leg by an unidentified subject, amplifying the kinds of dangers channel residents face.

Tim Warren, 58, is among the channel’s residents. He became homeless in 2005 despite an engineering degree that he earned from Devry University back in Nebraska where he was born, he said.

For years he held good paying jobs in the information technology industry, but as the companies he worked for relocated or were sold off, he found himself unemployed after being laid off by a company focused on making room for younger hires, he added.

“I felt like a piece of paper floating in the gutter,” Warren said.

While his cat mused about over the boulders near the water’s edge, Warren recalled an incident in which an assailant set fire to a tent of an encampment on the north side of the Manhattan Beach Boulevard underpass in an effort to burn it down.

“They want to victimize enough of us, for us to want to give up and leave,” Warren said standing amidst the boulders that now surround the encampment tents. “That’s what their idea is, their strategy. They just want to scatter us to the wind when it’s safer for us to keep together.”

The Gardena Dominguez Channel by @elcaminocollege yesterday afternoon where a homeless man died in 2017 after he was swept away by the current during a similar storm like the one that drenched L.A. yesterday, posing potential risks for the homeless residing nearby. #eccunion pic.twitter.com/BfLpU9N17H

El Camino College Police Department (ECCPD) Chief Michael Trevis said the population of the homeless living at the Dominguez Channel varies, but he roughly estimates there may be anywhere from 15 to 50 people living in the encampment.

Trevis believes conditions in the encampment are not good due to the increasing number of items that are being collected and stored by the encampment such as bicycles, tires and shopping carts.

Wildfire warnings were still being upheld through Monday, Nov. 18, as temperatures continued to hover near the 80s to 90s and wind gusts blew as strong as 30 mph, according to the National Weather Service.

Within the same week, rainy weather conditions affected these areas on Wednesday, Nov. 20. The stream running in the Dominguez Channel became a vicious flow of raging water and debris.

The downpour left stagnant water in the channel which attracts mosquitoes and could possibly lead to the spread contagious diseases including the West Nile virus. Trevis also added that the presence of urine and fecal matter in the channel cause very unsanitary conditions.

“It is extremely dangerous, particularly during rainy weather for anybody to be in the channel, in the riverbed, anywhere where water is rushing by,” Trevis said.

With rain being forecasted for Thanksgiving weekend, The Union reached out four times to the Los Angeles County Sheriff’s Department (LASD) through emails and phone calls but was unable to reach anyone to comment on the situation.

When asked to comment on an incident in which a homeless person from the encampment was turned away at the ECCPD station after reporting a stolen generator, Trevis was unable to give any information due to a time period of the incident not being provided.

“Anybody that comes into the police station here should be treated with courtesy and respect, whether they’re homeless or not homeless,” Trevis said. “If they’re reporting that something got stolen then we should take the report, if it was stolen in our property.”

Trevis added that the Dominguez Channel is not property of ECC, but rather a property of the County of Los Angeles. Therefore, criminal activity that occurs near the channel may be relayed to the Los Angeles Sheriff’s Department.

“Homelessness is not a police problem. It is a social problem, and I don’t think that the police should be the people that should deal with it,” Trevis said. “We need to be part of the solution, but not the [main] solution.”

Trevis pointed out that when the LASD and other L.A. County social services offer housing and other resources, the homeless from the encampment refuse because of rules that must be followed, such as the use of drugs not being allowed.

Trevis explained that when cleanups or displacements are scheduled to happen in the channel, a notice is given to the encampment from the Los Angeles County Department of Public Works.

However, as these scheduled events are taking place, the people from the encampment wait in the neighboring community and head back into the channel once Los Angeles County personnel leave.

“It’s just a cycle of this and it’s very hard to tackle,” Trevis said.

Trevis added that at some point, the community and government must work together to come up with a solution for the homeless, despite there being challenges in providing and accepting help.

“Homeless people are people, they need to be treated with compassion and respect,” Trevis said. “For whatever their reason is, whether they want to live like that or have no choice but to live like that, we all have to help one another out in some way.”

Anish Maharaj, 38, has lived across the street from Alondra Park since 2005. For the past three years, he has seen the homeless encampments come and go due to public safety concerns. He recalled the night the homeless person drowned in the channel due to flooding from the rain.

“One of them came to my house and tried to borrow a ladder to get their stuff, but I didn’t have one,” Maharaj said.

Over the past few years, packages have been stolen from outside his home, items have been stolen off the boat in his driveway and he found an inflatable Christmas decoration he recently put up to be punctured. This all prompted him to install a doorbell camera.

Maharaj lives in a cul de sac and said that although a car must have a city permit to park in the community, there are individuals that park anyway and walk across the street to hangout. They know that they will not be ticketed due to the hour of the night when they visit the encampment.

“I really hope that they can close this area so people can’t come in,” he said. “It’s easy for them to come and park over here.”

Maharaj said there is a lot of activity at the encampment late at night, but it has decreased since the boulders were put in place. He added that he still sees people riding their bikes up and down his street.

Maharaj is worried about the safety of his wife, kids and mother who is at home all day. He said he doesn’t feel safe on his own driveway.

“It makes the area look bad,” he said. “It’s a nice area and the people hanging out here is not right. Hopefully they find a better place instead of hanging out over here.”

Figures give reminder of snowballing crisis

According to the real point-in-time count by the Los Angeles Homeless Services Authority (LAHSA) more people are falling into homelessness for the first time despite a 4% decrease last year, according to KHN.

The figures, updated in August 2019, placed the total population of people experiencing homelessness in L.A. County at 58,936, a 12% increase from the previous year. 6,282 of them were scattered across the South Bay.

The numbers included men, women and children of diverse ethnic backgrounds for whom homelessness was a reality that continues to be worsened and provoked by the economic factors that have kept wages from keeping up with rental costs, causing the vast numbers of low-income renters to spend over 50% of their incomes on rent alone, 516,946 new affordable housing units are needed, according to LAHSA.

Currently, the lack of affordable housing, a 32% increase in rent cost since 2000 and the 3% decrease in the median renters’ household income are the driving factors leading more people into homelessness each year, according to LAHSA.

Despite the rainy weather being predicted for Thanksgiving, homeless populations across Los Angeles County will continue to sleep through plummeting temperatures in the streets due to LAHSA’s winter shelter program not going into effect until Dec. 1.

For Warren and some of the other homeless residents, the Dominguez Channel is their home and the only place where Warren feels a sense of familiarity. But he is not blind to the potential dangers constantly around him, he said.

“This place is bad,” Warren said, gazing at the gushing waters flowing through the watershed inches away from where his own tent stood. “It brings out the bad in people. Everything’s bad.”

The Union News Editor Omar Rashad contributed to this report.

Editor’s Note: A style clarification was made and media was added to the story.

Editor’s Note: A cutline in this story has been updated to correct grammar on Monday, Dec. 2, at 12:50 p.m.