EOPS recognized for 50 years of service 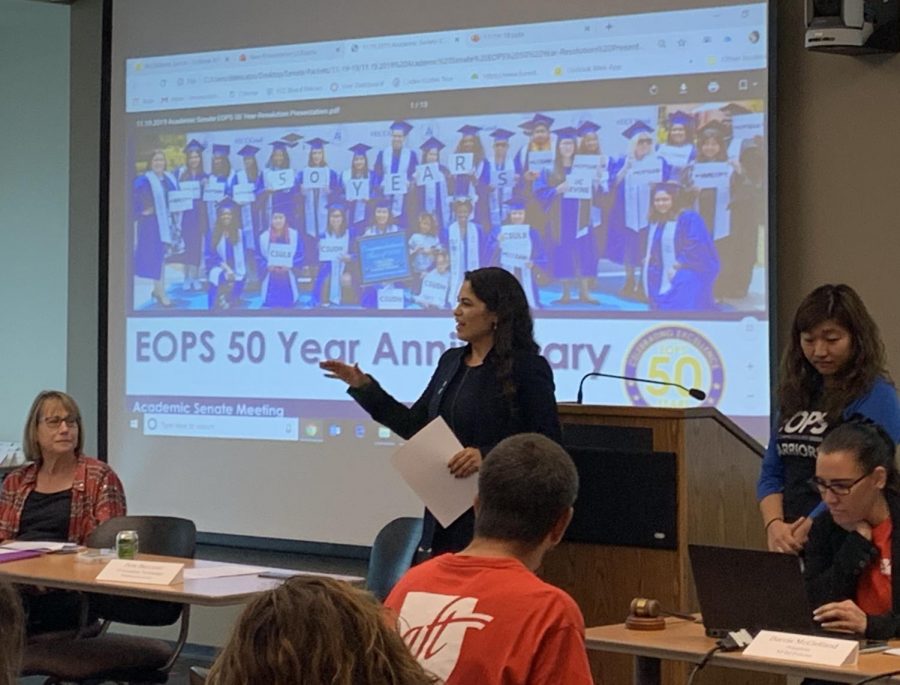 Edith Gutierrez, the director of the EOPS, CalWORKs and CARE programs at El Camino College talks about the 50th year anniversary of the Extended Opportunity Programs and Services at an Academic Senate meeting on Tuesday, Nov. 19. That day, the Academic Senate passed a resolution recognizing the program's 50th Anniversary. Photo credit: Jose Tobar

The 50th anniversary of the Extended Opportunity Programs and Services that first emerged in 1969 as a result of the civil rights movement is being commemorated at both the state level and across multiple community college campuses in California.

At El Camino College, the Academic Senate passed a resolution on Tuesday, Nov. 19, reaffirming its commitment to the program that has served thousands of disadvantaged ECC students, adding an official blanket of support for the program.

Academic Senate President Darcie McClelland told The Union that the senate wanted to recognize the important work that the Extended Opportunity Programs and Services (EOPS) has been doing at ECC for the past 50 years.

“EOPS makes a huge impact in the lives of our students,” McClelland said. “It has served some of our neediest students on campus who need support the most because they have faced a lot of challenges in their educational backgrounds yet have managed to be resilient and have overcome a lot of those obstacles.”

During the presentation of the resolution, Edith Gutierrez, the director of the EOPS, CalWORKS and Cooperative Agencies Resources for Education (CARE), outlined several of the program’s recent accomplishments and talked about the kinds of struggles that led to the program’s formation.

The civil rights movement helped establish EOPS in California, a struggle that people fought and died for, Gutierrez said. The educational opportunities that it created were not just handed over but were the result of pressure from protesting students at campuses like UC Berkeley and community college students who were demanding equal access, support and quality education for people in under represented low-income communities, she added.

“In 1964, [following] the Civil Rights Act, the California community colleges followed suit [when] in 1969 SB 164 created the EOPS program,” Gutierrez said. “It was very visionary.”

“The resolution really formalizes the support,” EOPS Counselor Anna Brochet said after its approval. “We always have to protect our resources. Sometimes budgets get tough and money is taken from our more marginalized population, [but it’s] harder to dismantle [it] in the future if someone wants to pull money away from [the program] because of the commitment [the campus has made].”

During the 2018 to 2019 academic year at ECC, EOPS served a total of 1,898 students, awarded over 600 associates degrees, associates in science degrees and associates degrees transfer degrees, and provided over $600,000 thousand in the form of book vouchers, grants, and success kits, according to the EOPS website. However, Gutierrez said that the numbers of students served had increased.

More recently, ECC’s EOPS program was ranked the 7th largest within the CCC system but an update provided by Gutierrez during her presentation revealed that the college has moved up to the No. 6 spot.

Manny Salas, a 22-year-old ECC student, is the first in his family to go to college. He is in his fourth year at ECC and would like to transfer to UC Berkeley. He is also enrolled with EOPS and gives credit to the program for helping him monetarily in the form of book vouchers and for the guidance provided by the counselors there.

“They have helped me organize myself,” Salas said. “To find and select the classes that I need with a schedule outlined from point A to point B that will allow me to follow through towards my career.”

More information on eligibility requirements for the EOPS program is available at the following website: https://www.elcamino.edu/student/studentservices/eops/eligibility.aspx