Proposed law will re-evaluate the true cost of college 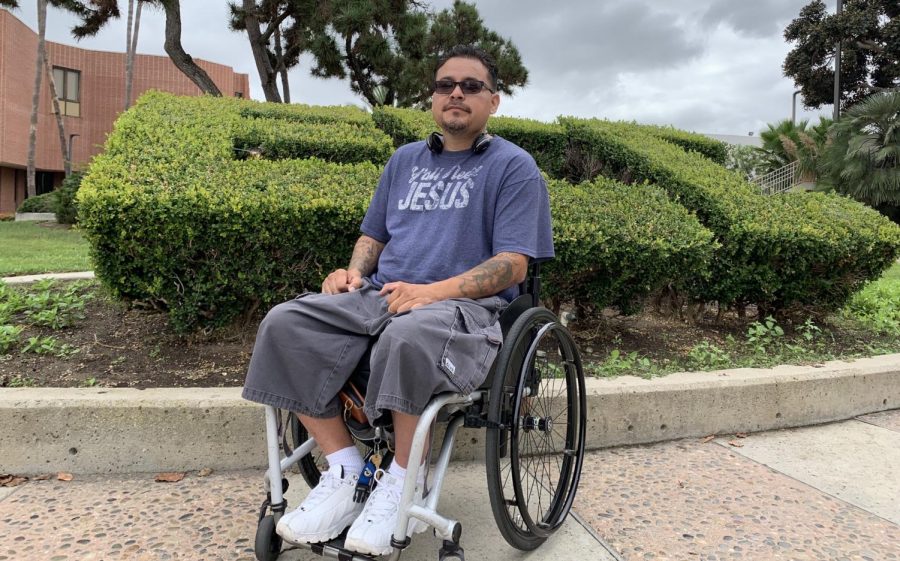 David Nieto poses for a picture outside the Bookstore at El Camino College on Thursday, Sept. 26. As a third-year student, he has maintained a 4.0 G.P.A while experiencing food and housing insecurities that have forced him to live in his car for a few months last year.

As a child, David Nieto grew up in a neighborhood of East Los Angeles and lived in a household with gang ties going back three generations.

College was not in the works for him, he said. But things changed.

“I realized there was more to living than dying for something,” he said. “So, whichever way God seemed fit to put me in, that’s where I decided I wanted to be.”

The 41-year-old psychology major has a 4.0 GPA as a third-year student at El Camino College and is determined to carve out a better path for his children and others to follow even as he faces food and housing insecurities while being bound to a wheelchair, he said.

Recently, the California State Legislature has taken measures to review the outdated Cal Grant system that would reflect the true cost of college and expand access to aid for more students like Nieto who are facing economic hardships at the UC, CSU and community college level.

As of Tuesday, Sept. 17, the Board of Governors (BOG) of the California Community Colleges (CCC) approved a Budget and Legislative Request for the 2020 to 2021 fiscal year, asking the state for an additional $780 million on top of its multi-billion dollar budget, $250 million of which would help implement Senate Bill 291 (SB 291) in conjunction with AB 1314.

SB 291, introduced by Senator Connie Leyva (D-Chino), would create the California Community College Student Aid Program that would provide additional grant money to community college students to help “offset the cost of attendance” by helping to pay for living expenses such as food, housing and transportation.

Under the proposed law, students would have to maintain satisfactory academic progress, file a FAFSA or a California Dream Act Application, be enrolled in an eligible program at the college and show proof of California residency or be exempted from paying nonresident tuition fees.

For students like Nieto, any measures being taken to address the chronic persistence of food and housing insecurity, including homelessness, would be outstanding if it could help struggling college students succeed in school, he said.

While at ECC, Nieto experienced the type of homelessness that forced him to sleep in his car at night; the money he receives from the federal government as a result of a spinal cord tumor that left him disabled and the financial aid money he receives is not enough to cover the costs of food, housing, gas and other living expenses, he said.

“Unfortunately, you find people like myself who fall through the cracks who really can’t make ends meet,” Nieto said. “Because in the day in age with the cost of living you have to choose: Do you want lights or do you want to go to school? You want food on the table or do you want to get that A? It’s a big choice.”

Other provisions would allow for full and part time students, regardless of age, to qualify even for recent high school graduates or for those enrolling in college for the first time.

The California Student Aid Commission (CSAC), the agency that administers the Cal Grant program, estimates that college students pay over $19,000 per year in non-tuition expenses, yet Cal Grant recipients receive, on average, less than $1,700 annually.

The first results of CSAC’s 2018-19 Student Expenses and Resources Survey (SEARS), released on Thursday, Sept. 12, revealed that out of 15,000 student respondents, a combined 64% of them reported that it was the cost of college or managing school and work expectations that created the highest barriers to their success.

More than 40% of community college students are over the age of 25, making them ineligible for the Cal Grant entitlement awards that traditional college students receive, Feist said. So when it comes to addressing the basic needs security of students, more aid could help those struggling so they can “buckle down and succeed in college,” he added.

At ECC, 2,812 students out of total student population of nearly 25,000 received a Cal Grant award during the 2017 to 2018 award year and 8,293 received the Federal Pell Grant award, Mellisa Guess, director of Financial Aid, said in an email.

“I would love to see more money for our students so that they can truly focus on going to school and not have to borrow or work as many hours,” Guess said. “If we [provided] more financial aid for our students, would more of [them] choose to attend full time and finish faster? I think they would.”

ECC President and Superintendent Dena Maloney, who supports SB 291, said the amount of financial aid assistance needs to reflect the costs beyond tuition and fees; eligibility requirements have to change so that more nontraditional community college students can qualify for Cal Grant assistance.

“Cal Grants are really designed for traditional students entering right out of high school,” Maloney said. “There’s an age limit, it also does not cover the total cost of education. Most community college students are older [and] do not qualify under it.”

Another bill in alignment with SB 291, but more inclusive, is AB 1314 or The Cal Grant Reform Act, would also affect college students at UCs, CSUs and community colleges.

Together the bills are in the process of being integrated and harmonized by authors and co-sponsors to form a more comprehensive financial aid reform bill, Feist said.

“We’re going to make a strong case in the upcoming [legislative] session that this is good for California, good for community college students and the state’s financial aid program, Cal Grant,” Feist said.

“And so, [the survey] really reflects and is telling us what the student story is whether it’s housing, utilities, WiFi, or books,” Media Relations Manager for CSAC, Bryan Sapp said. “AB 1314 [incorporates] a model called the Total Cost of Attendance that factors in various resources students face when they go to college.”

Pending negotiations include efforts to address the lack of funding for both bills in the governor’s proposed Budget Act for 2019 to 2020, according to a joint statement released by the bill’s authors back in June.

Meanwhile, the latest triennial Campus Climate Survey released during the spring of 2018 revealed that 39% of the 2,231 student survey respondents had been experiencing housing insecurity while 33% faced food insecurities during the previous year.

The survey also revealed at least 13% of student survey respondents reported being homeless at some point in the previous 12 months.

For Nieto, the true cost of college involved more than tuition and fees, it involved obstacles and choices that many times seems for him like he is facing his own Goliath, he said.

“I’m doing this as an example not only for my kids, but for other people who came from a similar background as me or even people in a wheelchair who use it as an excuse,” Nieto said. “Giving up isn’t an option.”