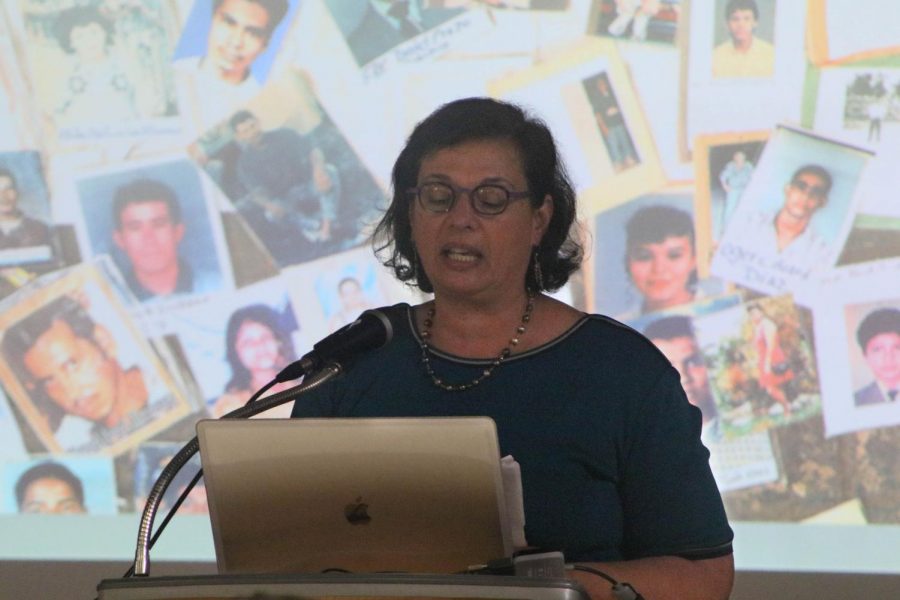 She preferred to ride her horse, Blanca, and come home reeking of manure to annoy her sister.

Meanwhile, her sister garnered the attention of their father as she skipped grades and became a class valedictorian.

“She was the goodie-two-shoes and apparently I was the opposite of all those things,” Nazario said. “My dad would just straight up say to my face, frequently, ‘Sonia, you are the dumb jock in our family.'”

However, on Thursday, May 2, Nazario presented her 2006 award-winning non-fiction novel “Enrique’s Journey” at El Camino College in a Puente Project Program event. Her book captures the adversities undocumented migrants from southern Latin American countries face to escape poverty and violence.

It was originally designed to help the students of migrant workers stay in school by providing extra help including embedded tutoring and counselors but now anyone can join, Castro said.

“Enrique’s Journey” is the story of a Honduran teen’s dangerous trek on the infamous train “La Bestia” or “The Beast,” as he travels from Central America to the U.S. in search of his mother.

“People tell me that my book is either a window or a mirror,” Nazario said. “It’s a window into a world they don’t know or it’s a mirror that validates that their experiences are like other people’s experiences.”

Nazario left Kansas and moved to war-torn Argentina in the 1970s after her father’s sudden death at the age of 13.

Nazario’s time in Argentina was overshadowed by the “Dirty War,” a military coup in which 30,000 people were killed, Nazario said.

Nazario said she remembers the day she was walking down the street of Buenos Aires when she saw a pool of blood on a sidewalk a block from where she lived and asked her mother what had happened.

Her mother explained that two journalists were killed for trying to report the truth about the war in Argentina and at the moment, Nazario decided to become a journalist.

“I saw the power of words that day, the power of telling stories, ” Nazario said. “Most of you would’ve probably made a different career choice staring at a pool of blood.”

She went to Williams College in Massachusetts and was one of five Latinos on campus.

Nazario almost flunked out her first year but was determined to work twice as hard and find mentors to help get her caught up.

“At 21 I became the youngest reporter, I’m told, hired by the Wall Street Journal,” Nazario said. “But I wasn’t going to write about business, I was determined to tell stories that I hoped would matter in some sort of way.”

So she decided to focus on social justice issues.

She described how she spent time in riot zones, crackhouses, and the most dangerous neighborhoods in Latin America writing “powerful” stories while overcoming obstacles.

So when Nazario decided to document Enrique’s travels, she took it upon herself to take the journey on top of “La Bestia,” to show readers what he had been through.

Nazario made the trip twice, traveling 1,600 miles for three months on top of seven freight trains and witnessing the terrors migrants go through while attempting to reach the U.S.

During her first ride, Nazario was hit with a tree branch that almost flung her over the top of the train.

“When this train finally stopped the next day, I learned there was a boy behind the car behind mine who was swiped off by the same branch,” Nazario said. “He was probably dead.”

Nazario said children as young as seven years old make the trip and go through everything from being beaten to corrupt cops steal their belongings.

Women often face sexual abuse as the top of the trains are controlled by gangsters and narcos, she added.

“I’d see them go from car to car and surround migrants and say: ‘Your money or your life,'” Nazario said. “Sometimes because they’re hopped up on crack or they’re just nuts they would throw people down to the turning wheels below.”

She said the dangers of the trip have caused the recent wave of large caravans going North because the migrants believe traveling in large numbers will keep them better protected.

Sitting atop the train also included dealing with the Southern Mexico heat, which would make the metal train searing hot, and the Northern Mexico cold that would make children freeze to death, Nazario said.

But as she reached her breaking point, Nazario said she realized she was only going through one percent of what the children making the trek go through.

Nazario said that whenever the train had to slow down, she would see people running out of stick huts with bundles of food in their hands for the migrants. Those that couldn’t offer food would give water or pray for them.

During the presentation, Nazario emphasized the importance of foreign aid, which President Donald Trump recently sought to cut off to reduce homicide rates in dangerous neighborhoods in Central America.

“In Honduras, 96% of all homicides get no conviction,” Nazario said. “If a witness steps forward and says ‘I saw that crime,’ tomorrow the gang leaves them in the middle of the street dead.”

‘Sapo’ or frog is often written on the chest of the deceased to remind people what happens to those who come forward.

Nazario said the U.S. has been funding a non-profit that goes into the worst neighborhoods in Central America and convince people over months to testify.

The witness is put into a black burka that covers them from head to toe and when they arrive at the courthouse they are placed in a closet that has a one-way mirror on wheels, Nazario said.

The witness is then wheeled into the courtroom to testify through a voice distorter, she added.

Through this non-profit, homicide convictions in the worst neighborhoods in Central American countries have gone up while homicides rates have gone down, Nazario said.

Nazario is a prominent figure in the Latino community and advocates for the Puente Project Program. The room was quiet as her story resonated with students.

“She’s putting her voice out there,” Anthony Morales, a mechanical engineering major and member of the Puente Project Program, said. “Inspiring us to be able to use her story to empower ourselves and strive for better.”

As reported by The Union last year, Latinos made up the largest ethnic group at EC in the 2016 to 2017 academic year.

Morales said the Puente Project Program has helped him as a member of the Latino community by providing a safe environment.

“One of the reasons we did this event was to see that we don’t impact just a small community of Latinos, we try to impact the whole school,” Morales said.

He added “Enrique’s Journey” felt personal to him as he recently had a cousin attempt the trek from El Salvador and his family has not heard from him.

Erica Brenes, a Puente Project Program coordinator, said the program at EC has two families as Puente serves 70 students as compared to other colleges that serve 35.

“[Puente] has definitely provided a place where you can meet people,” Jessica Ruiz, a civil engineering major, said. “It really helped me because we have our own personal counselors and we have a real connection with our teachers.”