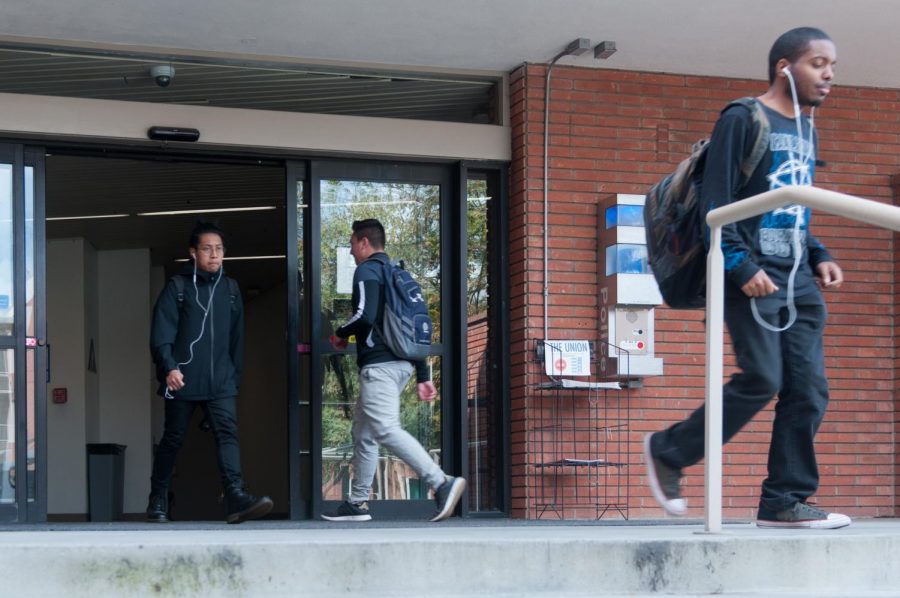 The Schauerman Library no longer has any book gates. They were taken down because of false alarms as students who were not carrying library materials were the subject of the gates' alerts to personnel. Thursday, March 22. Photo credit: Elena Perez

Book gates located inside El Camino College’s Schauerman Library were taken down in the first week of March because of frequent false alarms caused by outdated technology, a librarian said.

Public Access Librarian Gary Medina said the gates served the purpose of alerting personnel when materials were taken out of the library without being checked out. However, the book gates’ alarms also went off on students not carrying library items.

“We had a situation with our book gates where they just go off randomly,” Medina said. “They would go off all the time and students wouldn’t necessarily have one of our materials.”

The gates located at the library’s lobby entrances would regularly give library staff false alarms, sometimes going off ten times within one hour depending on student foot traffic, Medina added.

The Schauerman Library is often used as a shortcut to get across EC. Instead of having to walk around the Distance Education Center, Learning Resources Center and library to get to, say, EC’s popular south parking lots, students can be seen cutting through the library’s lobby in droves to get across campus faster around noon.

“We get thousands of students sometimes that will cut through over the course of an hour and it [book gates] would regularly go off and people wouldn’t have anything,” Medina said.

When book gates went off, library staff would call students back into the library to verify whether they were carrying library items; Medina said the frequency of the book gates going off on students without library materials did not make for the best environment.

“We had to analyze how welcoming of a place is that, when you’re telling students who don’t have anything to keep coming back,” Medina said.

The book gates were over 15 years old and after librarians worked with EC administrative staff, the outdated security system was removed, Medina said.

Early Childhood Education Major Allison O’Neill attested to the frequency of the book gates going off, also recalling a time when she was exiting the library when the book gates went off on her as well.

“It would go off really frequently,” O’Neill said. “It just seemed like it was going off every second at certain times.”

She also added that if the library is taking out a security measure, a just-as-effective measure should take its place.

Medina said removing the book gates came down to providing a more “welcoming atmosphere,” which is one of a few other changes the library has recently implemented.

For example, throughout his time at EC over the past two and a half years, Medina said he discovered the Schauerman Library had never done an inventory check in its long history. After working with the cataloging staff, the library is now in the middle of its first inventory check, he said.

“When we do inventory again in three, four or five years, depending on what timeline we are looking at, we can see and assess our collections that way,” Medina said.

Medina added that with consistent inventory checks, library staff would be able to gauge the number of missing items from the library, also known as shrinkage.

Outreach Services Librarian Camila Jenkin also explained the concept of pushing for more library initiatives and other changes at the library. She said the library’s North Reading Room turned into a more collaborative space during the 2019 winter session after students requested for a space meant for meeting with others and working on projects.

Jenkin, who was recently hired during the fall 2018 semester, said she frequently works with ASO and other student organizations in order to engage with students for feedback and suggestions regarding the library. She said the channels of communication she and other librarians have opened up with students help the library to better serve the EC community.

“Our mission is to work with our campus,” Jenkin said. “Our biggest effort is to find out what the community needs.”