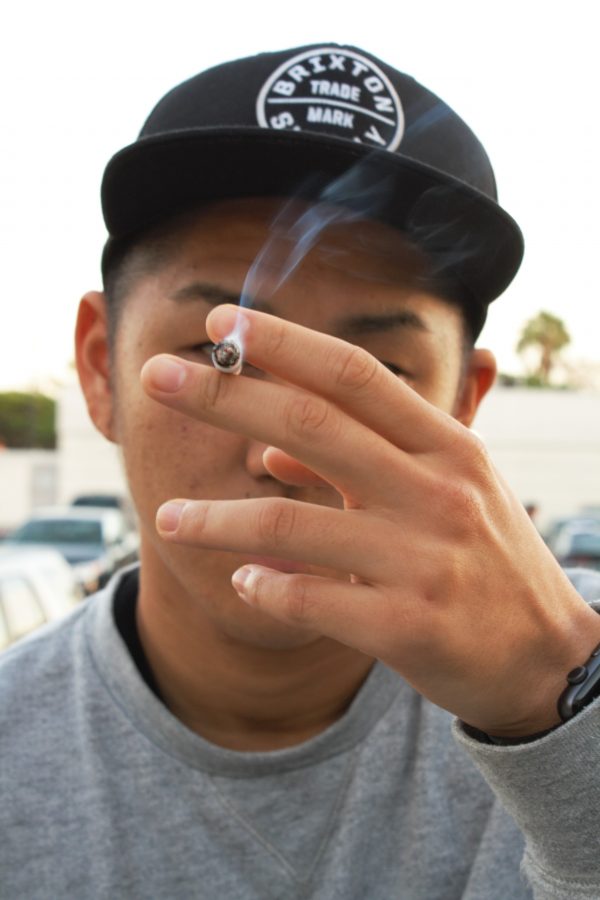 An anonymous student, 22, psychology major, takes a cigarette break between classes on Monday outside of the Music Building. Photo credit: Alain Miranda

California is taking big strides in making it increasingly more difficult for people to smoke, enacting new laws like raising the legal smoking age from 18 to 21 last June.

As a result, businesses are closing down, brands have gone out of business and sales of cigarettes and tobacco products have declined.

Some students think these new changes are unfair to those who were already smoking before the law passed.

The change has not only affected students on campus, but businesses nearby.

An employee at Rocky’s Liquor-Food Mart on the corner of Manhattan Beach Boulevard and Crenshaw Boulevard said the store used to get a lot of students coming in from EC before they started strictly enforcing the new law.

The titan of the nicotine market for the last few years has been vaporizers, a market which gained widespread popularity but is now facing the same challenge of its competitors: the legal age change.

Vicious Vapor, located across the street from campus on the corner of Crenshaw Boulevard and Redondo Beach Boulevard, has had to adjust their sales methods to stay afloat, employee Joshua Alvarez said.

“We can’t even let people taste our (vapor) juices, because it’d be like giving away free product,” Alvarez said. “Other shops down Redondo Beach have been closing down.”

The law has caused many people problems, but Governor Jerry Brown’s signing of the bill may significantly reduce health risks in California, according to a 2015 study by the Institute of Medicine.

There would be approximately 223,000 fewer premature deaths, 50,000 fewer lung cancer deaths and 4.2 million fewer years of life lost for people born between 2000 and 2019, according to the study.

Experts also predict that the law will minimize early smoking initiation for 15- to 17-year-olds by 25 percent.

So where are people under 21 buying their cigarettes now? Certainly not at VIP Tobacco & Cigars in Gardena, where employee Sean Khan, 25, said the store is strictly enforcing the law even at the cost of lower sales.

Despite compliance of the law by local businesses, some students under 21 are not encountering as much resistance.

“I heard the news on Facebook and I thought it was not fair because I smoke,” Jefferson Cotton, 19, art major, said. “But there are still stores where I can buy cigarettes and they are ok that I’m not 21 yet.”

Now if students under 21 are caught on campus smoking, they could face disciplinary action as severe as getting “thrown out” of school, though it would ultimately be up to EC authorities, ECPD Officer Jan Caldwell said.

She added that since the law passed she hasn’t noticed any difference on campus.

The upcoming elections present another threat for California smokers: Prop 56, which would increase cigarette tax to $2 per pack.