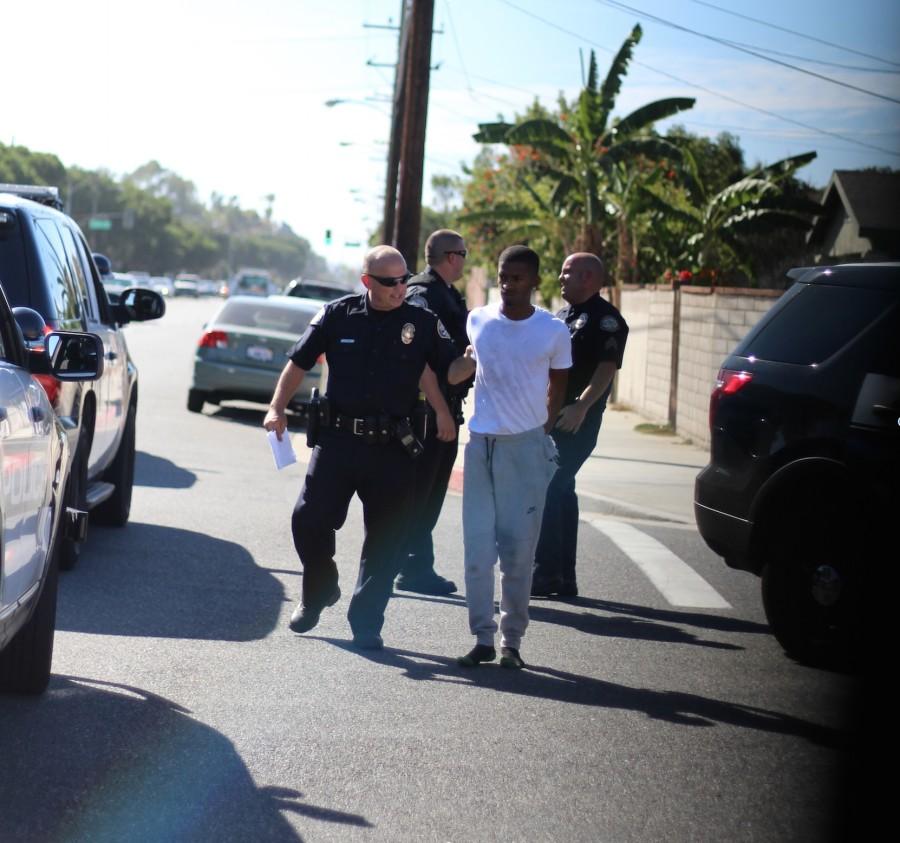 Officer escorts alleged burglary suspect to the back of the squad car. Photo credit: Jo Rankin

By Grant Hermanns and Phil Sidavong

Update, Sept. 29 at 9:30 a.m.: The incident was originally reported as a robbery when it was in fact a burglary.

Update, Sept. 29 at 11:40 a.m.: It was originally stated that the officers sent the police dog into the house. It has been updated to state that the dog was sent behind the house.

Helicopters circled low and police cars swarmed Manhattan Beach Boulevard and Chadron Avenue as officers searched for and arrested a burglary suspect on Monday across from the El Camino campus.

The suspect broke into a house on Atkinson Avenue, two blocks away from the EC campus, around 2 p.m., Gardena Officer Nick Pepper said.

The neighbors witnessed the burglary taking place, Gardena Sgt. Brian Messina said, and the police were then called as the suspect and a second suspect ran out of the house.

As the second suspect got caught right outside of the house, the first suspect fled west down Manhattan Beach Boulevard, escaping view from the police, but not before the helicopter spotted him hiding in one of three houses on Chadron Avenue, officers said.

Officers from Gardena, Inglewood, Redondo Beach and Hawthorne police departments proceeded to form a perimeter of the area in order to enclose the suspect before he could escape.

Around 3 p.m., the K-9 unit drove around the houses warning residents to remain indoors until given the all-clear, as well as giving the suspect one final chance to surrender.

“Most of the time when they see the dog, they hear the dog, and they want to surrender,” Officer Pepper said. “99 percent of the time, they surrender.”

After no response from the suspect, the officers proceeded to take one of the police dogs behind the house on the corner of Chadron Avenue and Manhattan Beach Boulevard, in which they found the suspect and took him into custody.

He was brought outside with no shoes on, and he was limping as he was helped into the ambulance.

Messina said that it “was a regular takedown; nothing exciting.”