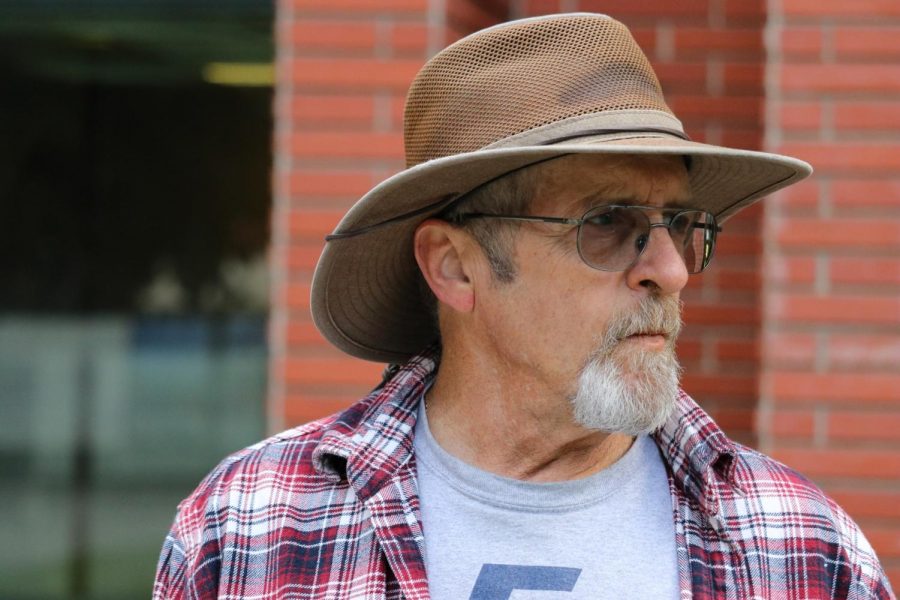 Carl Turano, a warehouse stock clerk at El Camino College, looks around for cats near a feeding station next to the Music Building on Saturday, Feb. 22. Turano has been taking care of cats on campus for approximately two decades and walks across El Camino College’s 126-acres while pulling a wagon with water and cat food. Omar Rashad/The Union

Every Saturday, he’s up before the sun rises. He hears crickets and feels the crisp cold atmosphere of an early morning.

As Carl Turano gets closer to a water and food station, a cat emerges from the greenery around him and snuggles up near his legs. Turano puts out a mound of dry cat food and watches another cat come out as they both eat up.

“I love this place with all my might,” Turano told The Union. “I give my heart and soul to this place and all this is just part of it.”

Turano, who works at ECC as a warehouse stock clerk, is also part of the El Camino Cat Care Volunteers, a group of about 50 ECC community members who provide for the cat population at ECC.

Turano, like many of his fellow volunteers, helps with cleaning up after the cats, providing them with proper vaccinations and flea treatment, spaying and neutering and organizing potential adoptions.

Most cats at El Camino College approach Turano, who, for a better part of two decades, has taken care of dozens of cats who reside in bushes and trees near small feeding stations.

On Saturdays, he walks all throughout ECC’s 126-acre campus with a wagon in tow, carrying water and wet and dry cat foods to stock up more than a dozen feeding stations.

At first, it was just Turano and an elderly woman who expressed a keen interest in feeding the cats at night. Over 20 years later, Turano is among the most prominent volunteers of the group.

“I stay super, super busy and most of what I do is giving,” Turano said. “I don’t take a whole lot, I give and that’s the way I feel about this campus.”

Although not as prominent as before, the volunteer group has organized a mobile spay and neuter unit to offer its services on campus.

“What we do here is really a justice,” Turano said. “I swear to God it is.”

Administrative Assistant of the Social and Behavioral Sciences Division Beverly Knapp described Turano as having a heart of gold because of his continued advocacy and empathy for the cats on campus.

“We’re lucky to have him,” Knapp, who is also a part of the El Camino Cat Care Volunteers, said. “Without Carl we would have a lot of problems.”

Turano, who has eight cats and three dogs of his own, has also rescued other animals besides cats, including dogs, birds and even a turtle. He recalled a time when he had to go into a sewer at ECC to rescue eight ducklings after their mother duck had been killed.

“I am a rescue guy. If I come across an incident and I can help, I do,” Turano said.

Turano proceeded to take the ducklings to a bird sanctuary in San Pedro, where the ducks were raised and placed in zoos.

“Without that it would be an ugly place,” Turano said, when asked about the initiative he and his fellow volunteers take when aiding animals. “You’ve gotta be an ambassador, you’ve gotta help where you can.”

As concerns have grown following rumors that administration officials are considering getting rid of cats on campus, Turano said that if the cat population was to be eradicated, a vacuum effect would occur.

A vacuum effect happens when a new colony of cats replaces a former group of cats who have been trapped and killed or relocated. Cat colonies are rebuilt by breeding or when new cats come into an area with sources for food and shelter, according to FixNation, a non-profit organization that performs trap-neuter-return (TNR) procedures in the Los Angeles area.

“There’s always going to be resistance [to] the kitties,” Turano said. “There’s gonna be people that love them and people who don’t love them.”

Turano added that the campus would also face a rodent infestation if the cats were to be removed from campus.

Turano said that ongoing construction projects and bushes on campus getting cut down have disrupted the lives of the cats, giving them a hard time.

“They are chopping down a lot of greenery in places to make it so they don’t have anywhere to hide,” Turano said. “It’s hard on [them].”

The Union attempted to get into contact with Facilities and Planning Services Department officials including Executive Director Jorge Gutierrez, Assistant Director Christopher Egnozzi, and Grounds Supervisor Gregorio Luna, but they did not respond to requests for comment.

The Facilities and Planning Services Department is dedicated to maintaining quality within campus buildings and environment.

Despite Turano’s efforts to look after the campus cat community, the threat of coyotes looms over the cats.

Over 300 felines once roamed around ECC, Turano estimated; however, as the population continued to rise, so did the sightings of coyotes and the number of attacks on the cats.

Turano said coyotes are fearless, sharp and systematic hunters. They kill their prey almost immediately, especially cats, as they target them by biting into their necks, he added.

“The coyotes are probably the biggest threat [to the cats]. I really don’t believe they’re going to go after the people,” Turano said. “We’ve run them out of their homes, now they’re just coming back and they need somewhere to be.”

Turano recalled a female cat he rescued along with the litter she had given birth to underneath a shelf in the dirt by the Construction Technology Building. The kittens were put up for adoption and Turano brought the mother back to campus.

“I was desperately looking for somewhere for her to go,” Turano said. “She was a rubby, mushy kitty right off the bat.”

However, one day, Turano discovered her remains and knew that only a coyote could have dealt that level of damage.

“The only thing I found of that cat [was] her back leg,” he said. “That kind of stuff is heartbreaking.”

Although Turano said the coyotes are a threat to the cats, he noted how they are also animals and they also have to survive.

“That one’s a hard one because how can I say I’m an animal person and then tell you ‘Kill those f—ing coyotes,’” Turano said. “You can’t do that.”

Turano has built strong friendships with the cats around campus, he said that if he were to return after missing a couple of days of work, they would go crazy when they finally see him again.

“It’s heartbreaking when you have them and you find them sick, you get attached to them and then they die on you,” Turano said. “That’s the hardest part of all of this.”

Turano said he would like to work more with animals in the near future, as he feels he was meant to be helping and rescuing animals.

“Animal work is what I’m supposed to be doing,” Turano said. “It took me a long time to figure that out and it just takes me to a really peaceful place when I’m doing that.”