Optimistic student changes life around after troubled past 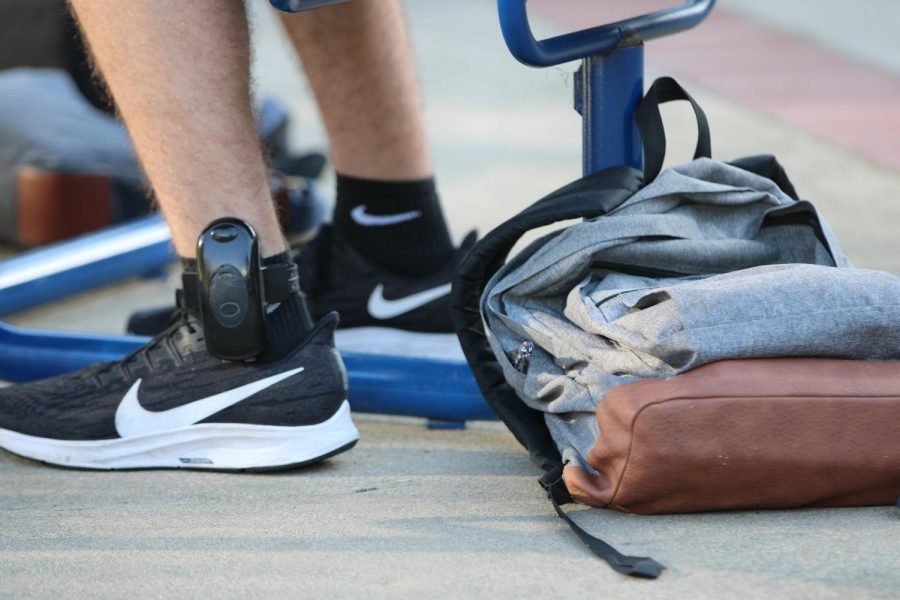 Colin Downs, 22, history and philosophy major, is serving a three year probation for drug possession. He is required to wear an ankle monitor until March 2020, Downs said. Jaime Solis/The Union

In high school, his life drastically changed around the age of 15 when he started using drugs and alcohol as a coping mechanism for his problems.

With feelings of isolation and barely any friends, this became the start of his drug use.

And at the age of 17, he started taking drugs with people other than his friends.

Colin Downs, 22, is a very ambitious student double majoring in history and philosophy. Though Downs is devoted now, he was not the best student and felt socially isolated throughout high school.

“I just kind of felt like crap all the time,” Downs said. “I would hear about people going to parties and football games. I felt almost as if I wasn’t worthy enough to go there.”

Downs said everything started to go downhill once he convinced himself that staying home and smoking weed was better than going out.

“During high school, I felt really isolated socially and I didn’t feel a sense of belonging to any group of people,” Downs said. “I didn’t have many friends and so I turned to use drugs and alcohol as a coping mechanism because I felt like crap all the time.”

Downs was caught for drug possession at the age of 18 and was required to wear an ankle monitor for three years in order to reduce his sentence to a misdemeanor. Downs has four months left of the monitor requirement.

“It started as a felony,” Downs said. “The lawyer plus the prosecution agreed to a misdemeanor for drug possession with the requirement that I wear an ankle monitor for three years and be clean.”

Students fill the library with chattering of their voices and the flipping of pages as many are seen studying. On one table, Downs sits diligently concentrating on history notes as his blue eyes skim the pages.

Downs is currently taking nine classes with a total of 27 units this semester.

If it were not for others who encouraged him to change his life around, Down may not have even pursued a college degree.

“I think the co-workers I met [at Vons] really helped me see the value of an education,” Downs said. “Even though none of them had been to college, they all encourage me to like.[coworkers said]. ‘you should quit this job and go to college. You can do so much better. We believe in you’ sort of thing.”

Downs said the main motivator that influenced him to change his life around and go back to school, fall 2018, was the encouragement from his co-workers at Vons.

“I gravitated towards history a lot because that was one of the only topics in high school I really liked; it was the only class I ever tried in,” Downs said. “They [teachers] were really nice to me and that inspired me to work hard in their classes.”

Downs balances out his large coursework by studying about two hours during the school week and on the weekends he spends about six to seven hours studying Friday through Sunday.

On top of taking a large course load, he is also part of three clubs: the Political Science Club, Philosophy Club and the Alpha Gamma Sigma (AGS) honor society.

Downs said his favorite club is the Political Science Club because they discuss current events and bring in guest speakers to present to the club.

“They had a speaker who works in [L.A.] city government so it was really cool to hear her perspective on it talking about the homeless crisis,” Downs said. “She was so passionate and interested in fixing the homelessness crisis.”

Though Downs did not graduate from high school, he did pass the California High School Proficiency Exam (CHSPE) in Oct. 2014 and later a GED in June 2015.

Downs said he also chose to get a GED because the CHSPE is only recognized in California while the GED is recognized nationwide to give him the option to attend an out of state university later on.

Downs plans to pursue his career goal of becoming a lawyer either in criminal law or elder law.

“I think I can bring a unique flair,” Downs said. “I can relate and empathize with my clients is very appealing. I’ve been there.”

Andrew Walker, political science major, said that Downs would be a good lawyer because he is good at relating to people.

“He is able to connect to people on a personal level, getting people to like him and just relating to them on a human level,” Walker said.

Williams explained how others might not see it on the surface but that Downs wants to support and help others.

“I think its in a way where maybe you don’t see it at first but he really does want to help people,” Williams said

Downs plans on transferring to Cornell in fall 2020.

“Cornell appeals to me not only for its prestige but I think with the motto being ‘any person, any study,'” said Downs. “With me having such a complicated past, ‘any person’ really vibes with me. I want to show people that I can do it.”