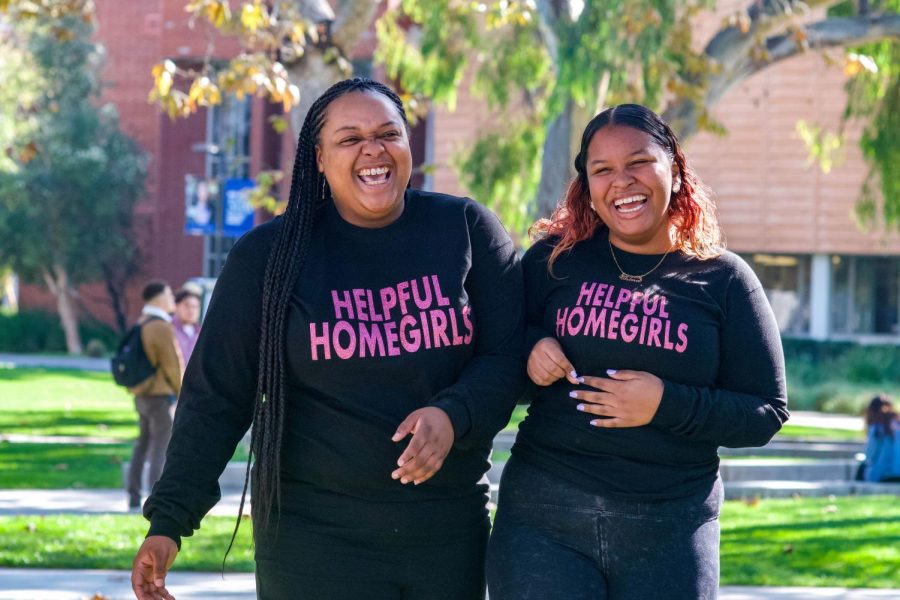 It started with a drive down Skid Row.

Tents were seen lined down the sidewalk with trash stacked up on the side of the curb.

Some people looked through trash hoping to find something to eat for the day, while others sat by their tents looking out as if they were waiting for another day to just pass by.

Looking out their car window, they realized if the homeless issue was going to improve, change had to start with them.

China Oseguera, 19, public health major at El Camino College and Jazmin Anderson, 20, biotechnology major, at Southwest College and the California State University of Northridge, are students who bring awareness to their school campuses on the rising issue of homelessness.

Growing up in South Los Angeles, they were surrounded by a community of middle class to low-income minorities, where there was a lack in hope for success. Applying to colleges, let alone going to college was never something many students would imagine themselves doing, Oseguera said.

This led to the start of their organization on Monday, Oct. 22, 2018, when they wanted to bring awareness to others about those less fortunate and the opportunities offered to them.

At the start of their organization, the first plan was to bring awareness to schools, but one idea led to another and they decided to start their Instagram account called @TheHelpfulHomegirls, Anderson said.

“I always knew I wanted to do something in the community, I just didn’t know how to start or what I should do, but I always enjoy volunteering so it was cool to start our own thing,” Anderson said. “It’s us helping people and not going to a third-party and like helping someone; it’s us doing the groundwork and doing everything we have to do to make sure things happen.”

The name idea initially came from The Helpful Honda Crew, however, Oseguera said that with it being such a big corporation it doesn’t have a family feel to it, so they made theirs more personal.

“The helpful homegirl is more like ‘Oh let me call my homegirl’, so we wanted it to feel more personal with the people, instead of being just another organization that comes in and out,” Oseguera said.

Now known as the Helpful Homegirls, Anderson, and Oseguera are using their Instagram platform to have people donate socks and snacks for this year’s Second Annual Sock and Snack Drive on Saturday, Dec. 21 on Sixth Street and Wall Street at 9:30 a.m.

“The things we do is more like community-based, kinda like Honda but they get to pick and choose which community they want to be in,” Oseguera said. “We were kinda born in this community, raised in this community so it is not easy going in and out and like a homegirl is someone you rely on.”

This will be their second sock drive since they started their organization, however this year they are adding snacks and serving breakfast as well.

Hoping to make the people’s holiday season better they will be providing care baskets with snacks, socks, and water for 300 people during their annual sock drive and serve breakfast to the first 100.

“We started our sock drive last year so we are starting to get more people involved and we are bringing more awareness to homelessness and how it is a big thing, with the homeless encampment and how the numbers have increased,” Anderson said.

These rising numbers come from the high rise housing crisis in California as L.A. is now known as one of the least affordable rental markets in the country, making it difficult for middle-class families to afford to house off of making minimum wage, according to L.A. Family Housing.

“Places like Compton or L.A. is coming up,” Anderson said. “It is changing so much from when I was a kid, so I’m just like ‘Wow,’ but these changes are factors to what is making people homeless.”

With small care packages that only include socks, snacks and water, that does not stop Oseguera and Anderson from accepting donations other than those.

“We take anything, blankets, clothes, we will never say no, we could pick it up or you can drop it off,” Oseguera said. “Grocery cards, monetary donations, anything you want to donate; people can donate their time, the more volunteers the better.”

As for their next steps, they plan on expanding their organization to other communities and populations.

“We are still young so this is just a stepping stone to something greater than what this is already, so we are planning to expand every year,” Anderson said. “I think the next population we would like to help out is women and as time progresses we will figure out what we want to do.”

Peter Marcoux, English Professor at ECC met Oseguera this year during his Fall English class and was inspired by her contributions to her community.

“I think she is doing a wonderful thing, and I completely support her,” Marcoux said. “I really admire her gumption to take on this monumental task, it’s such an important issue facing Los Angeles, so it is admirable what China and her friend are doing. Any small bit helps.”

And anything does help, Oseguera said. With future events planned, Anderson and Oseguera want to be prepared for anything and take on any challenge they can fix.

Despite the tough challenges within their personal lives, they have learned to overcome them and still manage to keep their organization up and running by helping friends, peers, family and the homeless.

“We are like homegirls, we’re friends, we’re mentors, we’re teachers, we’re students, you can come to us with anything,” Oseguera said. “It starts with us, if you need help you can reach us at any time.”