Music major blazes her own path in return to EC 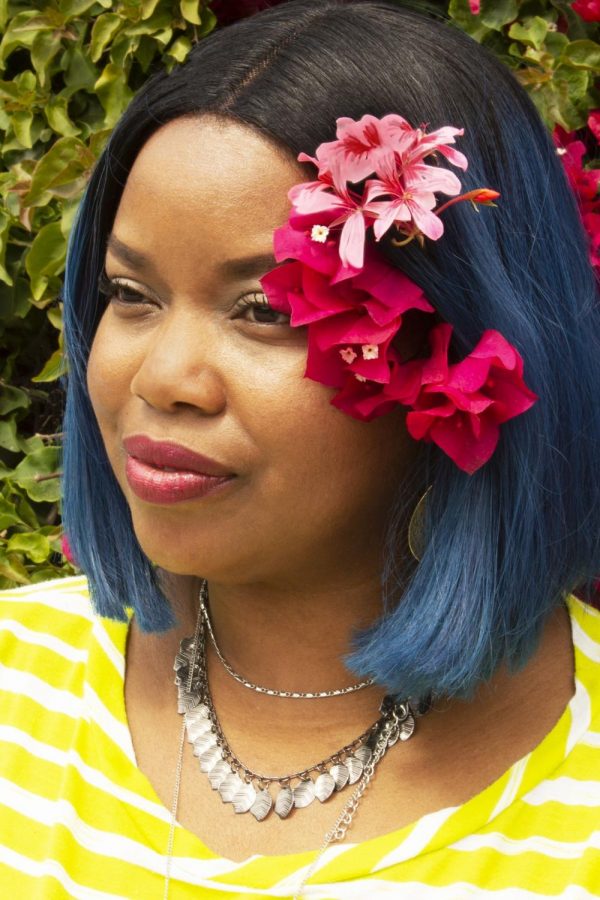 Artisan and music major Renaissance Marie Austin says she had a vision and decided to return to EC for her music degree. Photo credit: Maria Andradre-Reyes

Renaissance Marie Austin. Even her name sounds like a song. And she is just as beautiful.

Her bright blue hair has jet black roots and she wears it in a bob. Her hands jingle with beaded bracelets and silver charms, and her mix-match style resembles that of a fashion magazine.

“Everybody knows now, I am the jewelry lady,” Austin said cheerfully.

Austin was raised by her single-father George Cornelia Austin, though he died when she was just 14-years-old.

A hardworking, free-spirited, fun-loving man, George was a biker and a musician. He played the organ at church and encouraged Renaissance to sing solos in the children’s choir.

“My dad was the most supportive person that I have known,” Renaissance said. “In terms of me being very young, very creative, he supported that.”

With her father’s inspiration, Renaissance was an entrepreneur at 11-years-old. She made her first $5 after braiding a classmates’ mother’s hair.

“I started braiding hair throughout junior high and I just ended up having this clientele that just grew and grew and grew,” Renaissance said.

Renaissance said that although her hair-braiding skills were appreciated, her crocheting and knitting skills were not as popular within her black community.

Renaissance was questioned by other black Americans about her original designs because, she says, “I’m not making things with Kente cloth (a multicolored handwoven material that originates from the Ashanti people of Ghana), or leather, or wooden beads,” Renaissance said. “There’s an expectation… if I’m going to be an artist or an artisan, I should be an ‘ethnic’ artist or artisan.”

Today, Renaissance is an artist and entrepreneur.

She has her own boutique, Raghouse International, located in the Bixby Knolls neighborbood of Long Beach, where she creates and sells her original fashion designs and crocheted clothing.

In support of her best friend Maria Andrade-Reyes, Mhar for short, Renaissance promotes her skincare line, Mhar Creations, and sells it at her boutique.

Renaissance was impressed by Andrade-Reyes’ quality of work and wanted to diversify her boutique.

“Her soaps are just so unique,” Renaissance said. “Everything is organic and Mhar makes sure her products are the best they can be.”

Andrade-Reyes is a casual worker at EC where she assists in the photography department.

The two friends giggle like young schoolgirls as they talk about their close friendship.

“We have such a nice connection and she reminded me a lot of myself,” Andrade-Reyes said. “She was very friendly and outgoing, and she’s a fighter. We had so many things in common and we just became really good friends… now she’s part of my family.”

When Renaissance is not singing, writing songs, playing music, designing and making clothes, and running her business, you can find her on campus at El Camino, where she is completing her music degree.

But her decision to go back to school wasn’t her original plan.

In 2015, Renaissance was singing and performing publicly when she caught the attention of Bungalo Records, a subsidiary under Universal Music Group. They wanted to negotiate a contract and distribution deal with her.

“This is what I’ve been waiting my whole life for,” Renaissance said.

It was during that same time that Renaissance became increasingly ill.

“There were times where I would sort of black out, where I was like falling over,” Renaissance said.

Renaissance had four tumors in her uterus. Though they were benign, they nearly took her life.

She had surgery and recuperated, all the while considering two options: sign with Bungalo Records and be obligated to them while recovering, or go back to school and get a music degree.

So she prayed about it.

“I saw a vision and I knew I would be back [at EC] because I was determined and I was ready to conquer,” Renaissance said. “… I knew that I needed something else. I needed to be refreshed. I needed the knowledge of the music industry. I needed to think more. I needed other people to learn from and to grow from in order to say, ‘now I’m ready'”.

Coming back to school has opened a lot of new doors and opportunities for Renaissance.

She created a band, The Green Bus Band, with a few other students she met on campus. She recently performed with EC’s Concert Jazz Band. And she has had multiple requests and invitations to perform at local events.

Today, Renaissance is working on creating a name for herself in both the music industry and the small-business world. And she has a new passion; public speaking.

“What coming back to El Camino also did for me was prepare me to share my story because I was very shy about really saying who I was or being very open,” Renaissance said.

She has given public presentations and made speeches about her journey and encourages young people and others to be entrepreneurs.

“In black and brown communities, often times we don’t grow up within a family unit of entrepreneurship,” Renaissance said. “I just happened to be lucky because my dad supported that.”

Having her own business has given her the opportunity to come back to school because she is able to support herself financially, Renaissance said.

With her father’s encouragement, her Grammy’s instruction, her brothers support and her own grit, Renaissance is making her dreams come true, and despite the hardships she’s faced, she has not and will never give up.

“I think that if you always see the end [result], you’re always going to keep on running,” Renaissance said. “I’ve always seen the end, so I just keep on going.”