Food truck relocation causes sales to ‘drop by half’ 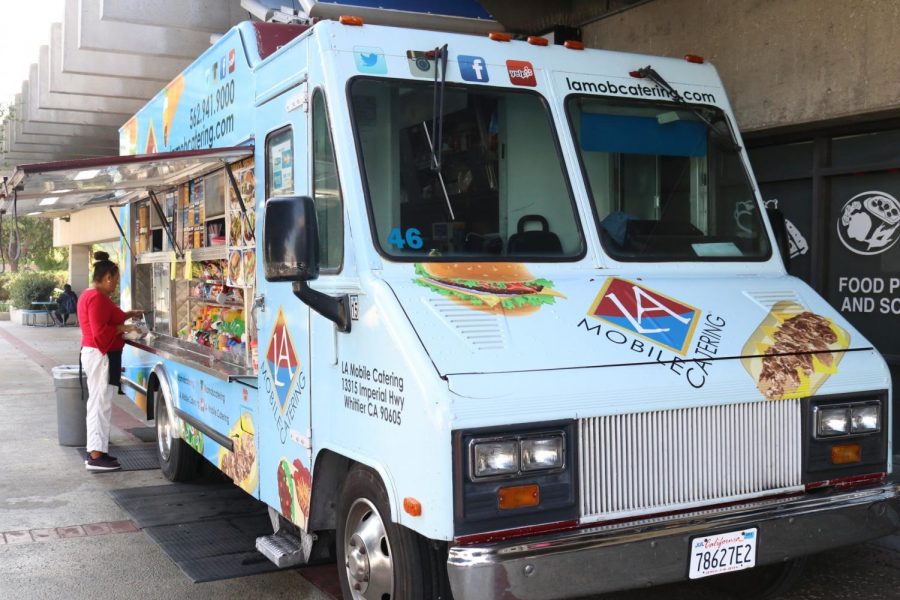 LA Mobile Catering food truck workers said they were happy when they first came to El Camino College. They sold “lots of food,” one worker said, like burritos and quesadillas—sometimes they even sold out, but only for the first few weeks.

Towards mid-September, Sandra Gonzalez, who works as the food truck cashier, was told by her boss, Armando Chavez, that she had to relocate the food truck away from the El Camino Student Activities Center.

Hence, Gonzalez had to move the food truck to the north side of campus, right next to the El Camino Bookstore and across from Parking Lot C.

Chavez, was not responsive to The Union despite countless attempts to reach him for a comment.

“I was very happy when I came to El Camino (at) first because it’s good business and the people (are) happy and they like the food and everything,” Gonzalez said. “But now, no, I’m not happy in the place they moved the truck.”

The food truck formerly sat next to the Student Activities Center in the Common Grounds, planted in the middle of an area where groups of students often eat lunch and pass by when leaving class.

Gonzalez said the relocation, which moved the mobile vendor away from the most common part of campus to the edge of its north side, caused the food truck’s profit to take a dive as she noticed her business “drop by half.”

And when asked why she had to move, all Gonzalez said was she knew that “Andy from the bookstore” had talked to her boss, Chavez.

Nasatir and Bourlier said they have explored methods of distributing food services throughout campus following the closing down of The Manhattan: a store that shut down due to a fire caused by an attempted break-in during June of 2016.

“The Manhattan Convenient Store served as just kind of a deli. Once that closed, food service to this whole [north] side of the campus disappeared,” Nasatir said.

After discovering how “incredibly expensive” it would have cost to get The Manhattan operational again, Nasatir noted that the college had decided to take a different route to “rectify” the north side’s food options.

The college’s temporary solution was the introduction of the LA Mobile Catering food truck. However, the food truck also required an electrical source, something that was not present next to the El Camino Bookstore prior to the 2018 Fall Semester.

Since Nasatir “didn’t think it would be appropriate” to call off the food truck for the entirety of the semester, he planned for the food truck to move adjacent to the bookstore once an electrical source had been installed.

Until then, Nasatir had planned for the food truck to temporarily reside next to the Student Activities Center.

When asked about the food truck’s drastic decline in business following its relocation, Nasatir said he was not aware of its profit loss.

Prior to the relocation, Gonzalez said she recalls packing up her truck and leaving campus as early as 2 p.m. when she sold out all her food by the Student Activities Center.

Gonzalez said the new location makes her “sad and nervous” as all her food is not sold within one workday anymore.

“We know that when we disrupt a current operation, if you take a snapshot from the next day, you’re going to see [profit loss]; but over time, that will rectify itself,” Nasatir said.

He also said communication regarding the food truck’s relocation was lacking and “there could have been a better job of that.”

Nasatir also said El Camino is in the process of creating an online landing page “so the community as a whole can login and see what’s happening with food service in general.”

The college is currently “investigating software” that will accomplish such a task, Nasatir said.

With no knowledge of the relocation prior, communications major John Ti’a discovered the new location on his own, frequenting the food truck every Monday and Wednesday.

With his classes being closer to the old location, Ti’a said the relocation was “a good move in some ways” and noted how “it’s not as crowded and there’s more shade here.”

The LA Mobile Catering food truck’s hours of operation are Monday to Thursday from 7 a.m. until 6:30 p.m.