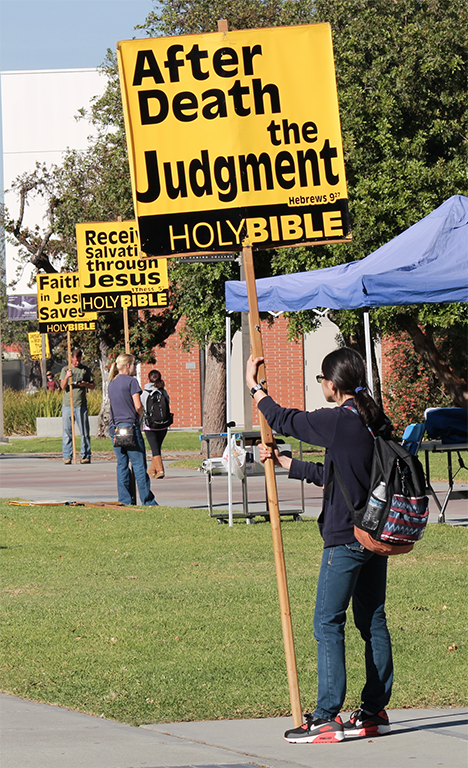 Students discover their career, plan their lives and learn about themselves while in college; for some students at El Camino, religion is the guide to forming their morals and thinking about the rest of their lives.

EC is a place where students, teachers, and community members have chosen to spread their faith.

Philosophy instructor Randy Firestone examines fundamental questions of life with students in his philosophy of religion class, like the question of a god and life after death.

Firestone said we should “question everything,” and that students should hear each other’s beliefs.

He uses comparative religion in class to see different ideas from faiths like Daoism, Hinduism and Buddhism, with the emphasis on an open mind.

“We have to show respect no matter what you believe,” Firestone said. “The goal is for students to learn and become more tolerant.”

Firestone said his students are usually accepting, and that the religious presence on campus comes more from outside groups.

Many religious groups/organizations frequent the campus and on Nov. 17 there was a particularly noticeable instance of large signs that could be seen bearing messages from the bible on and around the Library Lawn.

Representatives from the Jehovah’s Witnesses (JW) come to EC occasionally, and the members talked about being available to answer any questions a student might have.

“Our primary work is to teach people about the Bible,” representative Markis Cozart said. “There are a lot of students here and maybe some of them are interested in the bible so we have free literature to offer them.”

Another JW rep, Diane Matsumura said that it’s easier for her to talk to college students, and that they often are unattached from religion at this time of their lives, due to being so busy.

“(Students) have to initiate the conversation, and we just direct whatever their interests are,” Matsumura said. “Studying the bible is like studying at school, it’s systematic, like putting together a puzzle.”

JWs and others get permission from the school to set up booths and EC is a public campus, so groups are allowed to walk around but that doesn’t mean students like it.

Ryan Mizukami,18, physics major, said he is an atheist and that while he doesn’t discriminate those who practice religion, he wants his privacy at school.

“I don’t want to have to ignore them on my way to class or take a bible,” he said.

Encounters can get a little awkward for students when groups don’t follow the protocol of students approaching them first.

“I don’t want people to force their religion on me,” Song Kim, 18, engineering major, said.

There are other ways to get involved for those who are interested in religion, clubs like the Muslim Student Association and Engage Christian Club offer school-sponsored settings for students to organize.