Review: Fall Advanced Dance Concert leaves it all on the stage 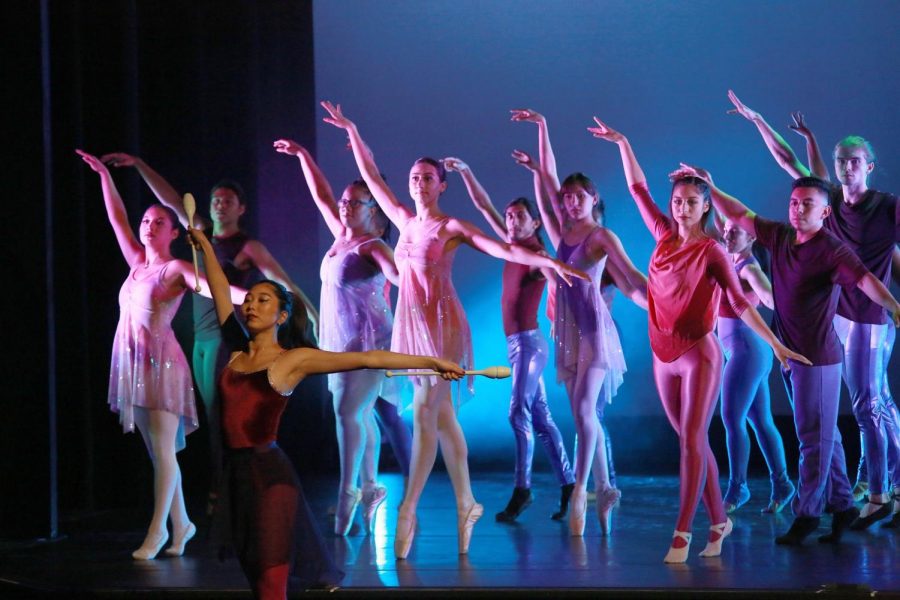 Performers moved graciously across the stage in bright pink leotards in the cheerful opening act of Pointed Ribbons during the Fall Advance Dance Concert on Friday, Nov. 22.

The two-act performance had a variety of upbeat and somber dances.

Love in Pieces was a very captivating dance. Its a multiple dance story of the different stages in a relationship and Cyborg, a more somber and futuristic style of dance.

In the dance Love in Pieces, choreographed by Liz Hoefner Adams, the dance was a story about the experiences many young people have when in a relationship. The dance was one the audience could understand clearly without having any prior experience with dance and music.

The first stage was “Not the One”. Dancers were wearing casual clothes jeans and t-shirts with hearts on them. The music is jazzy and the dancers were trying to get the other partner to like them unsuccessfully. One male dancer ends up scaring a girl away. The scene was done in a comical way.

The second stage was where one couple finally became a perfect match and had a dance where they are one with each other and were grooving together.

The scene feels symbolic to the distractions from other girls, the girlfriends feel that their boyfriends get distracted during a romantic partnership just like in real life.

The “Last Attempt” was a modern dance with upbeat music, where the couple dances together. The boyfriend partner lifts and twirls the girlfriend. It was supposed to be the last chance for the couple to stay together.

“Solo of Despair” was a performance including a male dancer enters the stage looking very upset from the break-up. he eats ice cream and dances somber movements to the sober music playing.

The final scene was “Alone by Choice” a happier dance vibe that was showing that they were choosing to be alone rather than be in a relationship. The dancers were trying to convey that they were content with the way things are. The song lyric playing in the background saying “I’m alright” over throughout the song.

The dance was very enjoyable, broken up into different stages of mini dances because it told a story that was easy to comprehend. It was a story that is relatable for many who have been in a serious relationship and I am sure many audience members could relate to it.

The Cyborg was another great part of the performance, it was a dystopian and futuristic style dance. They wore video cameras on their heads so as an audience member you felt like you were part of the act. The male and female dancer danced close to one another moves in synced flawlessly.

The scene ends in a usual way when the dance does not end on stage but off stage. The female dancer goes behind the curtain, off to the side and puts her hand over the camera ending the scene.

At the end of the night, the whole audience cheered and the student dancers faces were beaming with smiles.