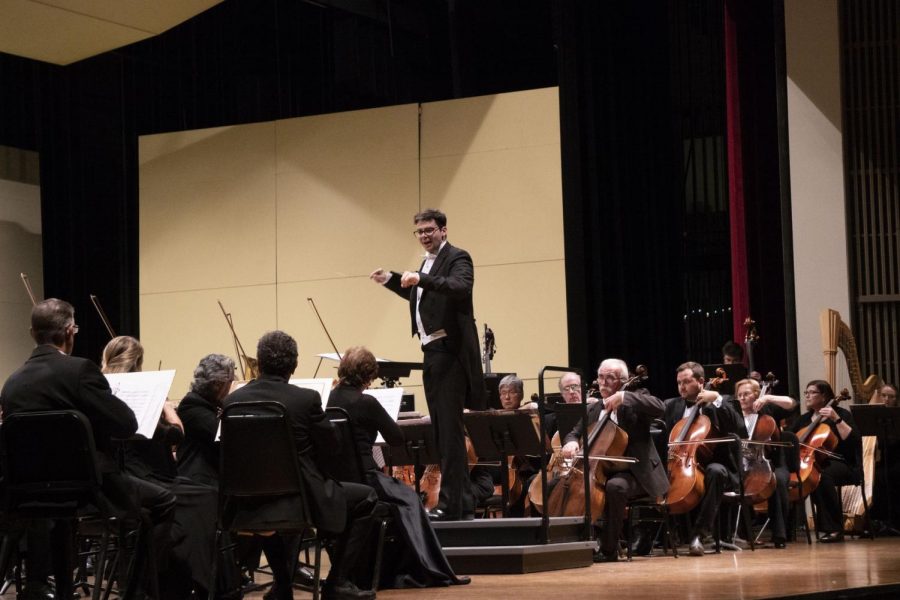 Beach Cities Symphony’s performance was a great way to start off their 70th season with a bang and used the music to send the audience on a harmonious roller-coaster ride on Friday, Nov. 8, in the Marsee Auditorium.

The melodic but wavering sounds of cellos, flutes, violins and other instruments preparing for the performance were faint yet heard throughout the auditorium as the crowd gathered around the stage.

The lights dimmed around the audience as the lights on the stage illuminated the conductor, Geoffrey Pope, and his orchestra.

“I feel elated. The orchestra is making some wonderful new sounds,” Pope said. “They’re listening to each other very carefully. They’re playing very mindfully together and that’s something that is really important, especially with a community orchestra.”

Then, with a faint drum roll, the first act began.

La Gazza Ladra is a traditional way to start an opera dating back to 1817 in La Scala, Milan.

The highs and lows of wavelengths were chilling to the bone as the transitions between songs sped up.

The feeling of closing my eyes and moving my hands back and forth as if I was the conductor allowed my eardrums to take in the array of sounds that I could not capture with my eyes.

The first act was received with cheers from the audience as Pope exited stage left and came back out with Georgi Slavchev, a well-known pianist, who was greeted with applause as he approached the piano.

The piano sat center-stage where Slavchev graciously waved to the crowd before taking his seat.

While the first act started with a bang, the musicians transitioned to a softer Act II, where the violinist’s beautifully stood out in the ballad.

The following act was a slower, more soothing pace that reminded me of “Home Alone II” when the main character Kevin watched a similar performance in the rafters of a New York church with the bird lady.

Then it was the pianist’s turn to serenade the crowd with each stroke of the keys while the orchestra chimed in periodically.

Turns were taken along the way, and towards the end of the second act as they rolled into an epic finish.

Standing ovations from the crowd were loud with an onlooker yelled “Bravo!” as a brief intermission approached.

The last song performed was “Suite” from Firebird where the cellos, flutes and trumpets flourished from beginning to end. The song reminded me of a scene from “Bambi” before and after the melee involving his mother.

Assistant Concert Master and violinist of 45 years Matthew Brislawn said he once performed Beethoven’s Symphony No. 9 and sat second chair first violin where he helped the first chairperson lead the section.

“Music is something you never have to leave. You never have to retire,” Brislawn said. “As long as you have your facilities, your dexterity, you can play your whole life and I plan on doing that.”

Mack Miles, a field supervisor in the environmental sector for an engineering consulting firm for 30 years and an actor for 40 years, said it was his first visit to a Marsee Auditorium event.

“‘Firebird’ was maybe the most exciting piece for me,” Miles said.

It started aggressive, switching to a melancholy/somber mood. There was a brief pause followed by what sounded like a canon. The tempo picked back up just before it slowed down and ended.

The event ended with a raffle, scholarship presentations to two middle-school musicians and cookies and juice in the lobby where many patrons stayed to speak with the artists.

The event was a success for all who participated as they left with smiles, raffle prizes and most importantly, priceless experiences.