“China: Beyond the Great Wall” delivers a first-person look into the ever-changing Chinese society 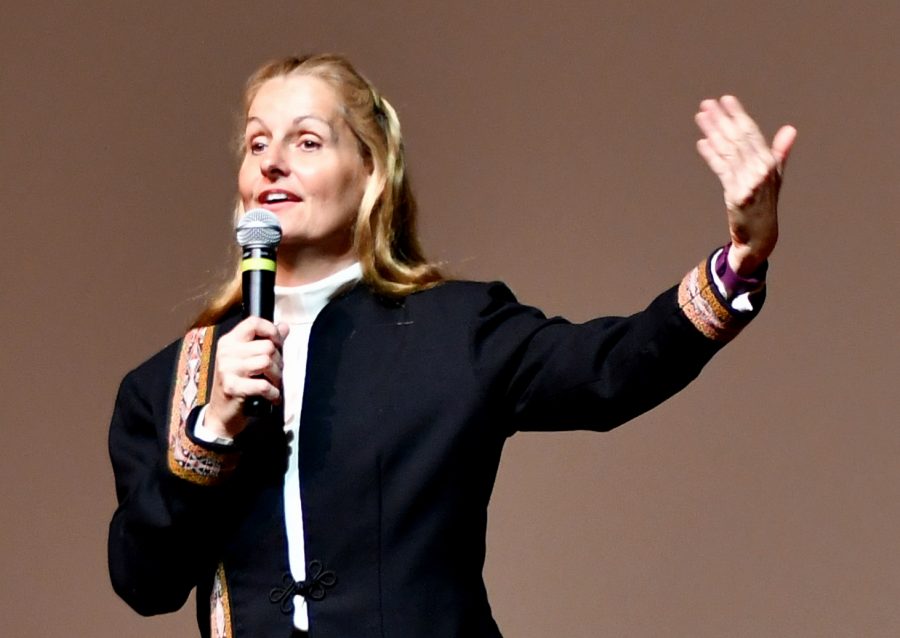 Filmmaker Karin Muller introduces her latest documentary, "China : Beyond the Great Wall" at the Marsee Auditorium on Monday, May 7. Photo credit: Jack Kan

On Monday, May 7, filmmaker Karin Muller presented her latest documentary film “China: Beyond the Great Wall”, as a part of El Camino College’s Discovery Film Series.

Muller introduced herself and her movie, which took three months to shoot on location. This was a California premiere, as Muller has shown this cut only once before at the University of Wisconsin in Madison.

She said that this version is not completely finalized, as she is still fine-tuning it from a total of three hours of usable footage. For example, she had a friend compose an original soundtrack which was recently added in.

Eventually, this footage will be made available on YouTube, which Muller thinks will allow her to reach a broader audience than with some of her previous films which were shown on PBS.

Times are changing, and long-form travel documentaries in theaters, with their faithful but aging and declining audience demographics, are becoming an uneconomic proposition in the age of YouTube and Netflix.

This film provides a personal and quirky look at China, but Muller manages to tie her very human anecdotes to broader themes and issues facing China today.

In a Beijing park, seniors play hacky sack, dance, write transient calligraphy with water on concrete paths, get their ears cleaned, or otherwise enjoy themselves. In another park in Shanghai, concerned parents play matchmakers for their adult unmarried children, in a country with a one child policy.

In China, gambling is officially prohibited, but Muller discovers that the ancient tradition of cricket fighting accompanied by heavy underground betting is well alive.

In a Shaolin monastery with its kung fu traditions, on Tai Mountain with its masses of visitors, and on the Li River with its fishing cormorants, we see storied locations now torn between breakneck touristic development and growing environmental problems.

Muller then shows us the industrious but spartan life of workers in the booming Shenzhen Special Economic Zone, where so many of our gadgets and toys are made.

She travels to “ethnic minority” regions such as Tibet or Xinjiang, where freedom of press is severely curtailed due to governmental fears of independence movements.

In Kashgar, Chinese authorities summoned an APC to arrest Muller for filming and for contacting local Uighurs while under a tourist visa. She only managed to escape by hitchhiking for 12 days across China, bribing truckers along with cigarettes and liquor, in order to catch her exit flight during Chunyun, the largest annual human migration on earth. She will probably be blacklisted from China from now on.

In conclusion, Muller found China to be a safe and friendly place to visit, with a work ethic and fast-growing economy leading to social and environmental changes which are happening at speed on an epic scale.

She thinks that the authoritarian yet pragmatic form of government (since Deng Xiaoping) which has aided in creating such an economy also makes China one of the least media-friendly places in the world.

Yet, in spite of all this, she highlights individuals such as the young boy who hopes to leap from Shaolin to Harvard, the worker who invests his paycheck in a fancy car racing simulator acting as an escape pod from his tiny room, or the Belgian expatriate hotelier who is thriving along with his half-Chinese family.

After all, as Muller says, all these people are just trying to improve their lot, for themselves, for their family, or for their children, while having some fun along the way, just like the rest of us.

Click here to watch the complete trailer for Muller’s documentary, “China: Beyond the Great Wall.”