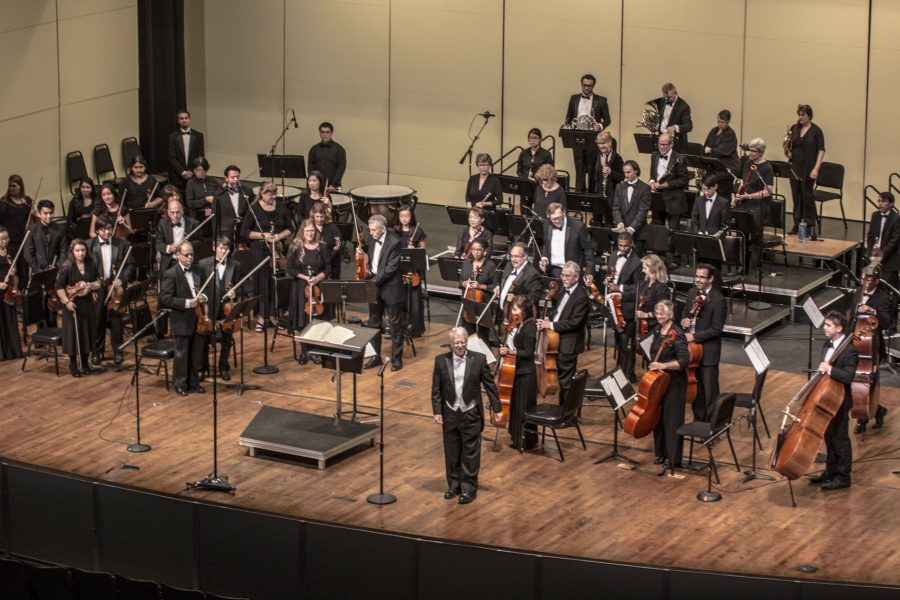 Dressed up formally with instruments in hand, the El Camino Symphony Orchestra delivered a harmonic performance in the Marsee Auditorium on Saturday, Nov. 5.

As director, Dane Teter, began to convey his orchestrating and communicate with the musicians, the instruments began to take a mind of their own.

The audience stood very quietly and some even raised their right hands over their hearts as the musicians started to play the “Star Spangled Banner” by F. Scott Key.

Chastity Tillman, 24, office administration major, said she most enjoyed listening to the cellists.

“It was a great a show,” she said. “The cello was my favorite, they just have a great presence.”

Orchestra members attentively read their sheet music as their grips steadied on their instruments and they began to play with Jonathan Stehney, soloist, as he performed “Andante e Rondo ungarese,” by Carl Maria von Weber, with his bassoon.

Arnoldo Rivera, 68, Los Angeles resident, attended the event to see his niece play with the orchestra.

“I had never seen her play before,” Rivera said. “I felt a very special emotion when I saw her.”

Wearing a long, yellow and blue flowing dress, Kyung Eun Choi, cellist, played “Cello Concerto in B minor, Op. 104” by Antonín Dvořák. While Choi performed, the audience was completely silent and some audience members even had their eyes closed as if the symphony was intertwining with their souls.

“It’s fun to put yourself back in time, you’re trying to picture the time when this (musical piece) was written and you try to see what the composers were going through and what they were feeling,” Stacy Diaz, 28, undecided major, said.

At the finale, the audience collectively stood for a standing ovation, cheering and clapping for the orchestra, and some brought flowers for the musicians.