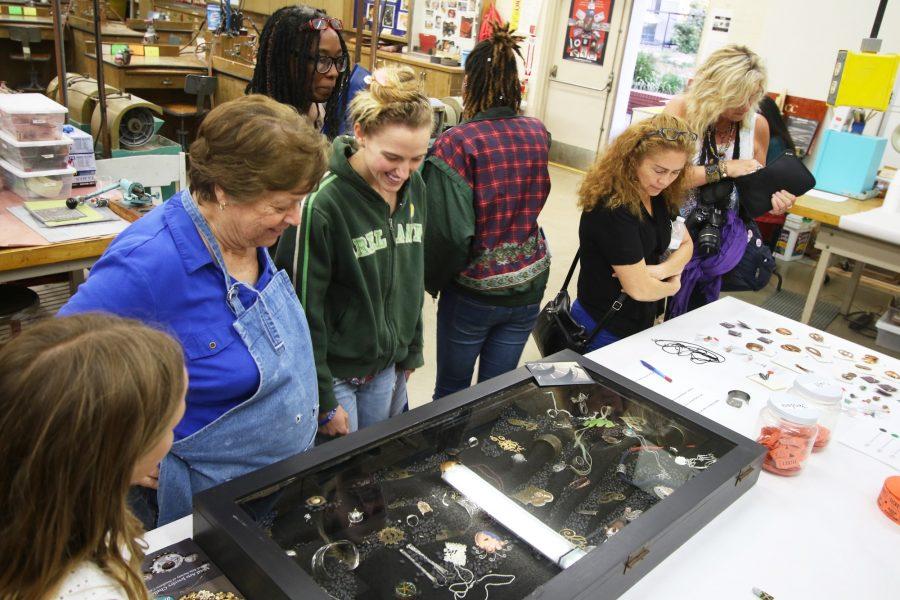 Photography, musical performances, ceramics and short films are a some works that were on display for people to enjoy courtesy of the Fine Arts Division Open House event held on Friday.

One could hear the music from the staff parking lot, as DJ Tony Jr. played jazzy, hip-hop and rhythmic music on his turntables with speakers set up on the Library Lawn.

The energy was high on Friday evening at El Camino, as people parked their cars and walked to check-in tables for the Open House event.

The Open House showed a variety of talent by EC students in different areas of the Fine Arts Division.

The Open House consisted of seven stations where a combination of the arts offered at EC was showcased by the students who are learning in these programs.

Station No. 1 featured the “Student Show” in the Art Gallery, where attendees could view the artwork of students enrolled in various art classes on campus. Displayed in the gallery were various pieces of photography and ceramic work. The maze-like layout of the gallery makes it easy to get lost while looking at the pieces.

The Art Gallery was the most crowded station, and people seemed to really be enjoying it as they walked through.

Erika Guzman, 19, math major, said that the Art Gallery is the most memorable for her.

“I’ve been to different art galleries and I have to say this is my favorite one that I have attended,” Guzman said. “It’s great knowing students did all this wonderful work.”

Station No. 2 took place in the Robert Haag Recital Hall where Applied Music Jury Honor students performed and showed their musical talent. Annie Chow, 19, music major, was one of the performers at this station.

“I was really nervous, but it was fun at the same time being able to play in front of people because this is what I want to do,” Chow said.

Station No. 3 was a short backstage tour of the Campus Theatre’s production of “Into the Woods.” There was also a meet-and-greet, where the cast was able to interact with attendees.

At Station No. 4, the award-winning forensics team performed a demo debate where students argued with opposing teams on different topics.

Station No. 5 was an Open Editing Lab, where students of editing and film classes learned to edit and make short films. Walking in the classroom, each computer showed a short video made by the students prepared for Open House.

After going through all seven stations, Taiwo Adeshina, 19, undecided major, was impressed by the work.

“Getting to see different types of art forms like video and dance is something I didn’t know this school had to offer, and then it’s just amazing to see what people can do,” Adeshina said.

Station No. 6 was all about dance, where students performed dance choreography and musical pieces, as well as short dance routines in the Black Box Theatre.

Station No. 7 was a photography demonstration showing how students make photos come to life while using different techniques with any camera if necessary.

Gaius Roberts, 32, photography major, was stoked about the opportunity to grow and have his work seen by people in the art gallery.

“I was extremely excited when I found out my photos would be in the gallery next to my peers and people who I actually work with, (it) makes me want to work that much harder,” Roberts said.

While dedicating the night to students in art, there was also a giveaway opportunity drawing for attendees that visited five out of seven stations. The giveaway included movie tickets, two tickets to the play “Into the Woods” and a Apple iPad.

Though the Open House was a one-night event, the “Student Show” in the Art Gallery will remain open until May 5, and there are still five performances coming up for the production of “Into the Woods,” according to the Fine Arts website.